White spruce is a medium-sized (occasionally >55m tall), evergreen conifer, with a fairly symmetrical, conical crown, a regular branching pattern that often extends to the ground, and a smooth, dark gray, scaly bark. The wood of white spruce is light, straight grained, and resilient. It is used primarily for lumber and pulp.

Distribution in Western North America:
(north) in the Pacific region; north and central in the Cordilleran region

In the BWBS zone, white spruce grows well on medium and rich sites providing a Moder humus formation exists. Wildfires are the major disturbance factor in re-establishing a white spruce stand when acidic Mors begin to develop, a humus form which favors the regeneration and growth of black spruce. Without the fires, the more shade-tolerant black spruce would become a dominant species and form a climatic climax stand. Thus, forest fires provide opportunities for the less shade-tolerant white spruce to become re-established. The same result is obtained by clearcutting, which promotes faster decomposition of organic materials and, hence, the Moder humus formation which favors the establishment and growth of white spruce.

White spruce is usually characterized as shallow rooted; however, depth of rooting in low-latitude soils without a root-restricting layer can be 120cm, with taproots and sinker roots possibly descending to a depth of 300cm. Roots of white spruce are associated with both ecto- and endo-mycorrhizae.

White spruce is highly variable over its range. White and Engelmann spruces and Sitka and Engelmann spruces are sympatric over large areas in British Columbia and hybridize, while hybridization is rare between white and black spruces. However, a hybrid of this type was found in Minnesota and was discussed by Little and Pauley (1958) under the English name Rosendahl spruce. Such a hybrid, evidently more similar to white spruce than to black spruce, has been also occasionally observed in the BWBS zone as well as in the SBS zone. Also, another nothomorph was collected from the Atlin area and described as P. x glaucana by Krajina. This hybrid is intermediate between the two species.

Hybrids between white and Engelmann spruce are very common and cannot be easily distinguished from the parent species. They are commonly referred to as hybrid white spruce or interior spruce (Sx) (Picea engelmannii x glauca); hybrids between Sitka and Engelmann spruce are often referred to as Roche spruce (see Picea engelmannii).

White spruce is a desirable component in pure or mixed-species stands in montane boreal forests, mixed with other either softwoods or hardwoods. The success of natural regeneration is often inconsistent; consequently planting is usually required if a high component of white spruce is desired in new stands. More detailed silvics information is given by: 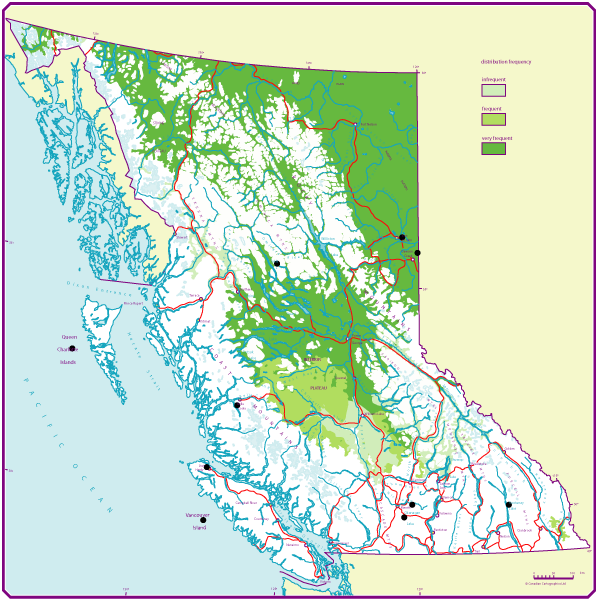 This is the range of the white spruce.

This is the general shape and outline of the white spruce. 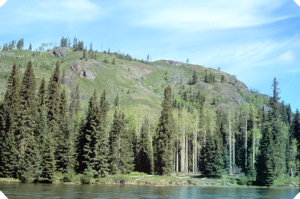