Distribution in Western North America:central in the Cordilleran region

Subalpine larch is well adapted to a continental subalpine boreal climate. It grows in the transition between the upper southern portion of the ESSF zone and the adjacent AT zone between 1800m and 2300m. It forms a timberline there together with subalpine fir, (Engelmann spruce), and whitebark pine. It tolerates very severe winters (the absolute minimum of -56 degrees C has been recorded). Occasional chinook winds of very dry air during the winter rarely affect subalpine larch to a lethal degree because of its deciduous habit, while evergreen conifers may be severely affected because moisture lost rapidly from foliage cannot be replaced.

The nutrient amplitude of subalpine larch is not well known. Field studies indicate that it is absent on very poor sites and grows somewhat better on calcium-rich substrates, such those derived from calcareous quartzites, sandstones, or argillites. However, very rapidly drained limestones are less favorable substrates in drier climates than other sedimentary and igneous rocks.

The root system of grand fir is intermediate in development among its associated tree species. The anchoring taproot does not grow as rapidly nor as deeply as it does in ponderosa pine, common douglas, and lodgepole pine, but it grows faster and deeper than in western hemlock, western redcedar, and Engelmann spruce. Seedlings roots penetrate the soil rapidly enough in full sunlight (slower under shaded conditions) to survive drought conditions in forest floor and surface mineral soil. A relatively deep taproot enables grand fir to survive and grow well on rather dry soils and exposed ridges. On moist sites, the taproot is largely replaced by more shallow lateral roots. Grand fir roots are associated with both ecto- and endo-mycorrhizae.

In British Columbia, grand fir grows prevailingly as a scattered, minor species in combination with one or more tree species. Pure old-growth stands of grand fir are rare. It is present in early, intermediate, and late stages of secondary succession; a minor component in old-growth stands in the CDF, southern IDF, ICH, and CWH zones.

There are no recognized varieties of grand fir, although a green coastal form and gray interior form are often distinguished. Some evidence from field studies on young trees suggests that grand fir may hybridize with Pacific silver fir or subalpine fir in the coast-interior ecotone (Fraser, Skagit, and Skaist River valleys), however, such hybrids have not been described.

Grand fir is a very productive species — equal to or surpassing the productivity of common douglas. Its productivity results from rapid growth in early and mid-stages of stand development, large leaf biomass, moderate shade tolerance, low crown spatial requirements (high basal area), low taper, and thin bark, characteristics pertaining to the whole genus Abies. Grand fir has been successfully introduced to Europe, where it is considered one of the most productive tree species. 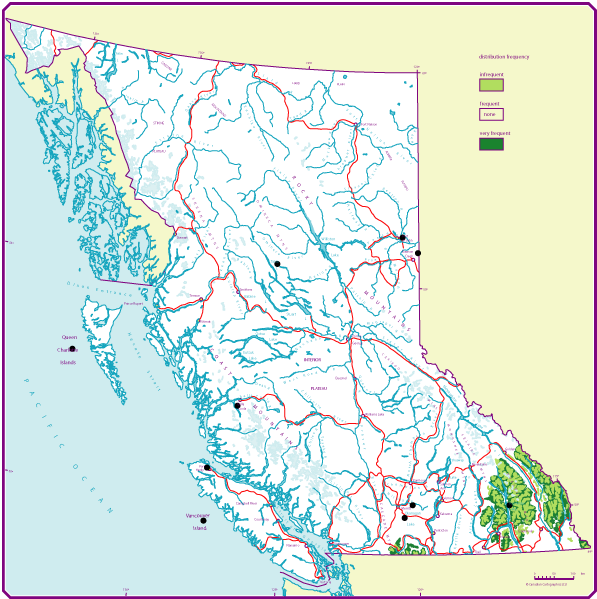 This is the range of the Subalpine larch.

This is the general shape and outline of the Subalpine larch. 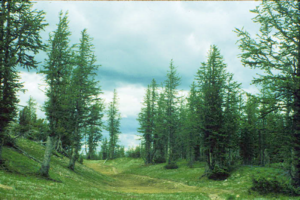 An open stand of subalpine larch in Manning Provincial Park.