Bigleaf maple is a medium-sized (<30m tall), deciduous, broad-leaved tree, at maturity with a broad, rounded crown, often curved stem (in the open, the stem soon divides into a few large spreading and ascending branches), and grayish-brown bark which is shallowly furrowed into narrow scaly ridges. Like sugar maple, bigleaf maple has sweet sap that can be made into syrup. Its wood is used for furniture, flooring, interior paneling, and musical instruments.

Distribution in Western North America:
central and south in the Pacific region; (central) in the Cordilleran region

Nutritional requirements of bigleaf maple appear to be high, especially for nitrogen (mainly nitrates), calcium, magnesium, potassium, and phosphorus. As a consequence, (i) its bark is rich in calcium that provides substrate for the establishment of many corticolous calciphytic bryophytes, and (ii) its litter contributes to the nutrient status of forest floor by increasing its nitrogen, calcium, and magnesium concentrations. Thus, the presence of bigleaf maple in coniferous stands will tend to improve humus form quality from Mors to Moders, which have higher decomposition and mineralization rates, and higher levels of plant-available soil nutrients.

Bigleaf maple has a shallow but wide-spreading root system. Roots are associated with vesicular-arbuscular mycorrhizae.

In British Columbia, bigleaf maple grows occasionally in even-aged, pure stands, but most commonly in early and intermediate stages of secondary succession mixed with conifers or hardwoods. It is a pioneer species (primary succession) on talus and floodplains, and is present in second-growth stands on upland sites. Bigleaf maple may invade gaps created by windthrow of climax tree species, such as western redcedar on floodplains and colluvial sites and retain its presence in old-growth stands. It frequently grows in clumps of 3 to 5, all originating from a single stump.

In some individuals of bigleaf maple, the grain patterns are unsurpassed, even by walnut, suggesting a potential for use in furniture. Considering its productivity, easy regeneration, and low risk of being affected by damaging agents, bigleaf maple is a suitable species for intensive management on some coastal sites (for example, skeletal alluvial fans, fragmental colluvial slopes, stream-edge sites, and floodplains). Considering its wildlife and aesthetic values and soil improvement capacity, it is a useful short-term or even a long-term, minor admixture in coniferous stands, such as common douglas stands, in southwestern B.C.

There are two other shrub-sized maple species: vine maple (Acer circinatumPursh) and Douglas maple (Acer glabrum Torr.), the latter of which may attain small tree size. While the range of vine maple is restricted to the southern coastal mainland, Douglas maple occurs throughout central and southern B.C., except the outer coastal region. Both species are shade-tolerant and their litterfall, like that of bigleaf maple, improves humus form quality. More detailed silvics information is given by: 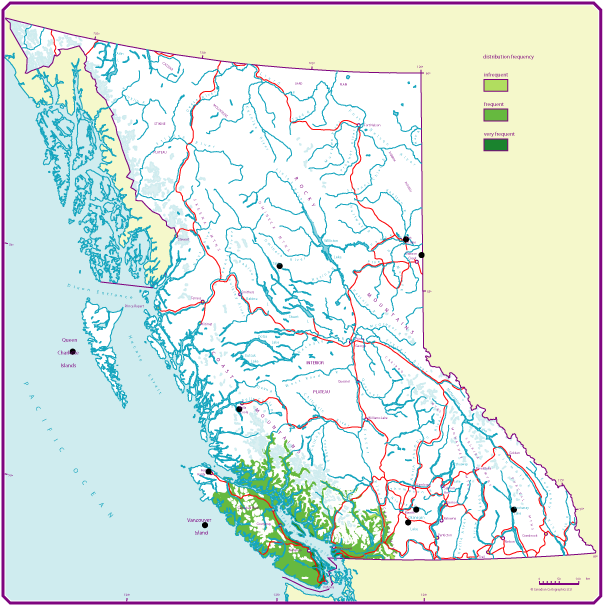 This is the range of the Bigleaf maple.

This is the general shape and outline of the Bigleaf maple. 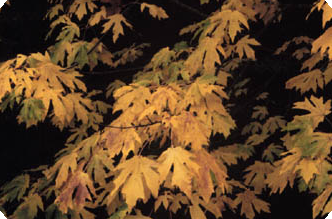 Bigleaf maple mostly occurs in maritime climates of southwestern B.C., where it grows predominantly on colluvial slopes or alluvial landforms. In most fall seasons the leaves of bigleaf maple turn brown, but during a sunny autumn, the leaves turn yellow - never red.