Pacific silver fir is a medium- to large-sized (exceptionally >70m tall), evergreen conifer, at maturity with a low-taper stem, a narrow symmetrical crown, with lateral branches perpendicular to the stem and light gray bark becoming scaly and grooved with age. It is a valuable timber species that is marketed with western hemlock. Its light-coloured wood, without odor, gum, and resin, is typically used for construction.

Distribution in Western North America:(north) and central in the Pacific region; (central) and south in the Cordilleran region

Field studies indicate that Pacific silver fir is more vigorous on calcium- and magnesium-rich soils derived from basaltic or limestone parent materials. Nitrates appear to be a better source of nitrogen than ammonium compounds as indicated by the Moder (Mull) humus formation on the most productive sites.

Pacific silver fir grows in all seral stages and in combination with one or more tree species; pure old-growth stands are not rare but not very common. It is present as a major or minor species in early, mid-, and late stages of secondary succession; a major component in old-growth stands in the wetter CWH subzones and MH zone.

Despite its extensive range, Pacific silver fir is not a highly variable species. Some evidence from field studies on young trees suggests that Pacific silver fir may hybridize with grand fir or subalpine fir; however, such hybrids have not been described (aforementioned observations were made in the Fraser, Skagit, and Skaist River valleys). High-elevation provenances burst buds earlier in low elevation, common garden studies (Worrall, unpublished data).

Pacific silver fir is a very productive species on a wide range of sites except on warm and water-deficient ones. Its productivity results from large leaf biomass, shade tolerance, low crown spatial requirements (high basal area per hectare), low taper, and thin bark. These characteristics pertain to the whole genus Abies. The shade tolerance of Pacific silver fir makes the species a desirable component in mixed-species stands (mainly with western hemlock, mountain hemlock, western redcedar, and yellow-cedar). Natural regeneration occurs on a variety of seedbeds and should be preferred to planting, especially on subalpine sites, considering a slow initial growth. More detailed silvics information is given by: 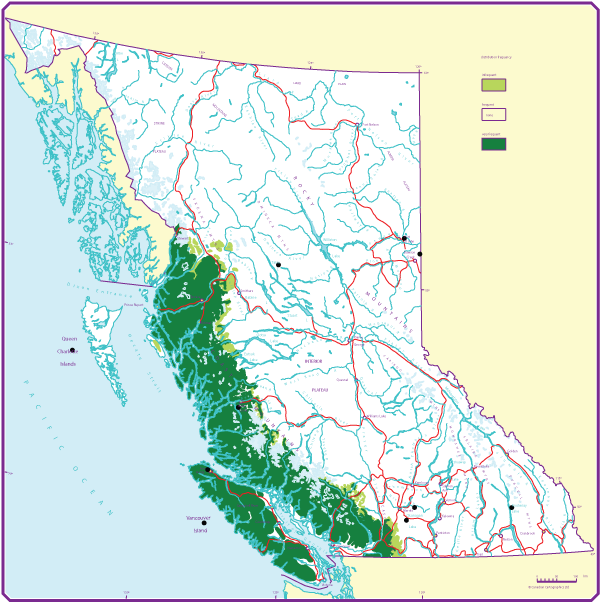 This is the range of the Amabilis (Pacific silver) fir.

This is the general shape and outline of the Amabilis Fir. 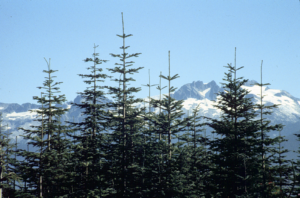