Western larch is a medium - to large-sized (occasionally >60 m tall), deciduous conifer, with a branch-free stem over much of its length; short, narrow, pyramidal crown and horizontal branches; reddish-brown, deeply furrowed bark with flaky ridges. Western larch is the world’s largest and most important timber species of this genus. It is an aesthetically attractive species, which is used for lumber, fine veneer, poles, ties, mine timber, and pulp.

Distribution in Western North America:
central in the Cordilleran region

Western larch develops a deep and extensive root system. Fibrous roots under young larch stands extend up to 100 cm in depth. Wind-fallen mature larch trees have their roots usually infected by root rots. Roots of western larch are associated with both ecto- and endo-mycorrhizae.

In southeastern British Columbia, western larch may grow in pure stands but more frequently, it grows in mixed-species stands. Old-growth western larch stands are rare. It is present in early, mid-, and late stages of fire-driven, secondary succession.

Some population differences were detected but races, varieties, or subspecies of western larch are not known.

Western larch forests are valued for their multiple resource values. Thus, the presence of the species in pure as well as mixed-species stands should be maintained or even increased where multiple resource use is the major management objective. More detailed silvics information is given by: 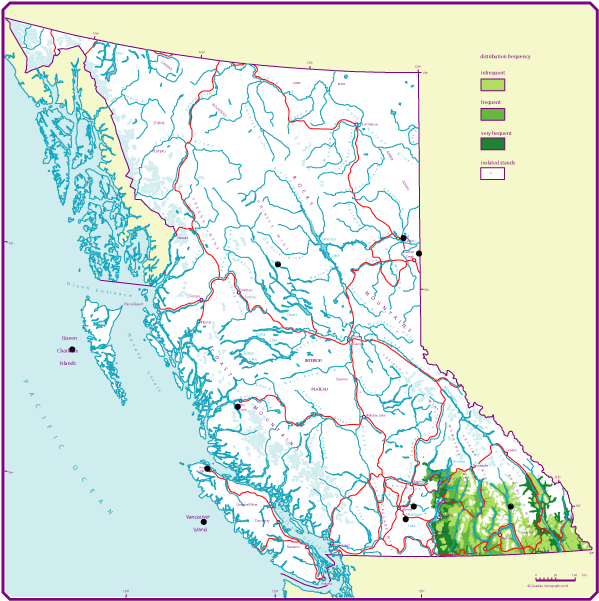 This is the range of the Western larch 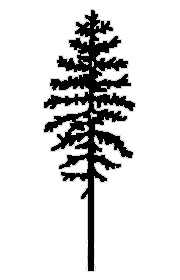 This is the general shape and outline of the Western larch. 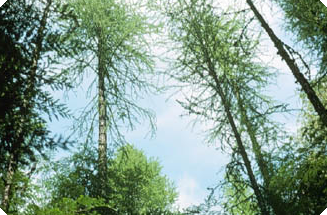