Western redcedar is a medium- to large-sized (rarely >60 m tall), evergreen, scale-leaved conifer, at maturity often with a forked (candelabra-like) top, a tapered fluted base, drooping branches, and thin, fibrous, brown bark. It is one of the most valuable conifers owing to the unique colour, texture, and durability of its wood; it is also the provincial tree of B.C.

Distribution in Western North America:
(north), central, and (south) in the Pacific region; central in the Cordilleran region

On the basis of sand culture experiments and field observations, Krajina (1969) and Krajina et al. (1973) concluded that western redcedar requires nitrate-N for its growth and cannot tolerate the complete replacement of nitrates by ammonium compounds. In this respect redcedar differs greatly from western hemlock, which tolerates the ammonium source of nitrogen.

Western redcedar was killed by ammonium, with the exception of one seedling (out of ten) which survived but showed evident N-deficiency. In contrast, all western hemlock seedlings treated with ammonium for two years were growing well, however those treated with complete Hoagland solution were growing better. In sand cultures, with a solution of only nitrates, all redcedars grew only slightly slower than those treated with complete Hoagland solution.

Western redcedar is able to survive and grow, though less vigorously, in soils with a low moisture and nutrient content. In fact, this species occurs on such soils over much of its natural range. However, common douglas tolerates poor soils somewhat better than redcedar

In British Columbia, western redcedar grows in uneven-aged, mixed-species stands, less frequently in pure, even-aged stands. It is present in early, mid-, and late stages of secondary succession; a major component in old-growth stands in the IDF, ICH, CDF, and CWH zones.

Western redcedar seems to vary less than many other tree species; however, some differences in the chemical properties were recently detected between coastal and interior populations.

Similar to Alaska yellow-cedar, western redcedar is one of the most valuable tree species of British Columbia when considering its ecological, silvical, and timber values. It could be also considered a nurse species as its foliage improves decomposition of forest floor materials. More detailed silvics information is given by: 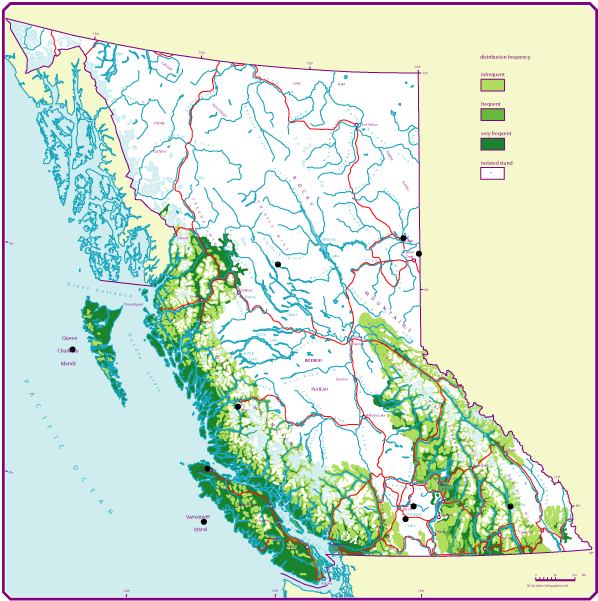 This is the range of the Western redcedar

This is the general shape and outline of the Western redcedar. 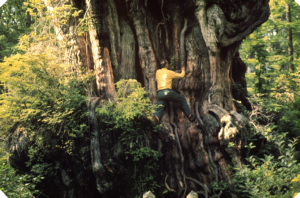 Western redcedar is one of the most valuable tree species of B.C., considering its ecological, silvical, timber, and cultural values. This picture shows an extraordinary western redcedar tree in the coastal rain forest.