Three West Kootenay communities – Castlegar, Nelson and Trail – co-hosted the 2011 BC Seniors Games with the motto "Three Cities, One Goal." Held from August 16-20, this year’s games gave more than 2,800 older athletes a chance to shine – in events ranging from ice hockey, dragon-boating, and archery to cribbage, horseshoes, and one-act plays.

The games, which attracted a large number of spectators and 1,700 volunteers, provide a great example of healthy, active aging. This year’s highlights included eight new Canadian records in track and field, and the Nanaimo mixed 55+ curling team sliding a rare "eight ender."

Congratulations to all this year’s participants! Next year’s games are slated for August 21-25, 2012, in Burnaby.

More news stories for and about B.C. seniors in the: 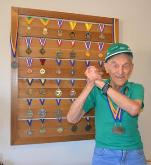 Invermere’s Ed Kluczny, 89, won gold at the 2011 BC Seniors Games in the 5,000-metre power walk and the 10-kilometre road walk for the men’s 85-89 age category. Over the years, Ed has competed in 23 BC Seniors Games and taken home 39 medals. He plans to compete in the men’s 90+ age category next year. Photo courtesy of The Columbia Valley Pioneer Newspaper.