Learn About Caribou in British Columbia

For thousands of years, herds of woodland caribou have roamed British Columbia contributing to the Province’s rich biodiversity and ecosystems. Learn more about caribou in B.C.

Caribou in Canada are a true northern species, specialized to thrive in a cold and barren landscape. They are classified into 12 designatable units (DU) based on genetics, appearance, behavior, and distribution and are generally categorized into three sub-species:

Caribou in B.C. were previously classified into three groups: mountain, northern, and boreal Caribou, but B.C. has now adopted the Committee on the Status of Endangered Wildlife in Canada (COSEWIC) classification system of DU

All caribou in British Columbia are Woodland caribou (Rangifer tarandus caribou); these caribou are comprised of 54 herds or subpopulations and are now classified into four DU’s: southern mountain, central mountain, northern mountain, and boreal.

For more information about caribou in B.C.:

Caribou are part of the deer family. They are larger than deer but smaller than elk and moose. Their coloration is usually medium to light brown with shades of gray and white on their rumps and necks. They are unique in that both males and females grow antlers. The males lose their antlers in the early winter and the females retain theirs until their calves are born in spring. Caribou hooves are relatively large and rounded, which helps them dig through snow to reach food (terrestrial lichens) and allows them to walk on top of the snowpack when feeding on lichen that grow on trees (arboreal lichens).

Under the federal Species At Risk Act (SARA), all Woodland caribou populations in Canada have been identified as needing special management actions because of their declining population trends.

The Province of B.C. is committed to conserving caribou in British Columbia through implementing measures to support caribou management.  For more information please refer to the following DUs:

Central Mountain Caribou (formerly known as northern caribou) live in east central British Columbia and west central Alberta. Some herds in the central mountain DU remain in subalpine forest and alpine habitat year round. In winter these herds eat either ground lichen from wind-swept alpine slopes or from mature trees near the treeline. Other herds move to low elevation pine forests where they crater for lichens in shallow snow. Despite differences in winter ranges, all herds return or remain in mountainous terrain for calving and summer. The lineage of Central Mountain Caribou is unique in that it contains a mixture of southern and northern lines.

Northern Mountain Caribou live in central and northern British Columbia with most moving between winter and summer ranges, although some caribou remain at one range year round. Calving strategies differ among herds, but most migrate to mountainous terrain for calving and summer. Northern caribou are distinct from other DUs both genetically and morphologically.

Boreal Caribou live in northeast British Columbia.  They differ from mountain caribou because they remain in boreal forests in winter and summer. Because boreal caribou do not seek refuge from predators in the mountains during calving and summer, they require large tracts of contiguous forest in order to space away from predators. Ground lichens are their main winter food.

Population Estimates:  The 55 caribou herds in British Columbia have been inventoried at varying times for many decades to understand their status and trend.  The survey techniques and methods for estimating population size differ based on the geographic area, weather conditions, time of year, etc.  The most recent surveys were completed in March and June of 2020 for select herds.

The Province of British Columbia maps caribou habitat in order to identify the geographic areas most important to their recovery and survival. These maps will be used in herd planning and developing recovery strategies for caribou and policies for resource users.

Habitat is defined as core or matrix using the best available science and expert knowledge.

Core and matrix mapping may be adjusted and refined as new science and knowledge becomes available.

Further habitat mapping is scheduled to be completed for the remaining B.C. herds: 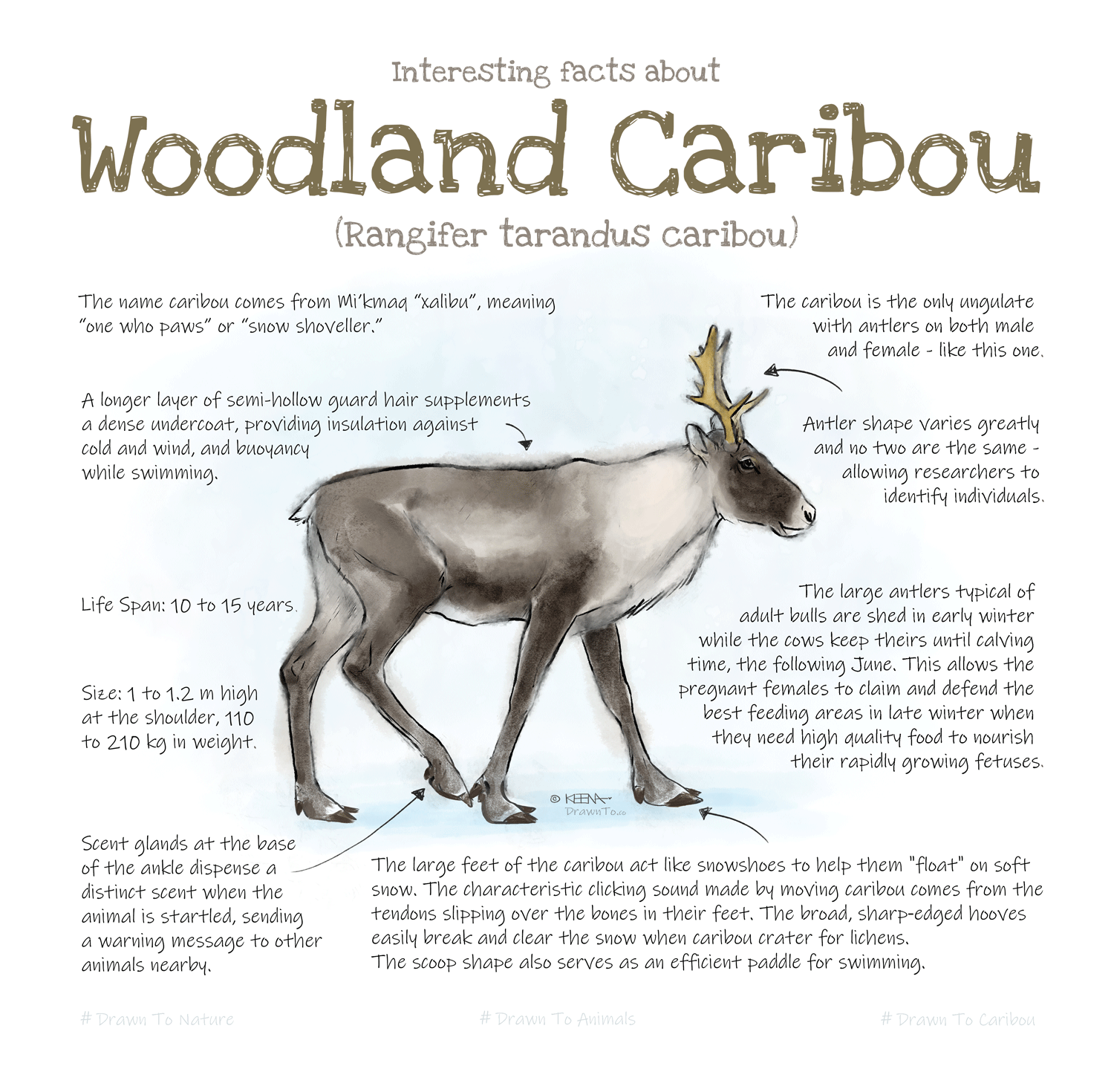 Use this map to find geographic caribou information in B.C. 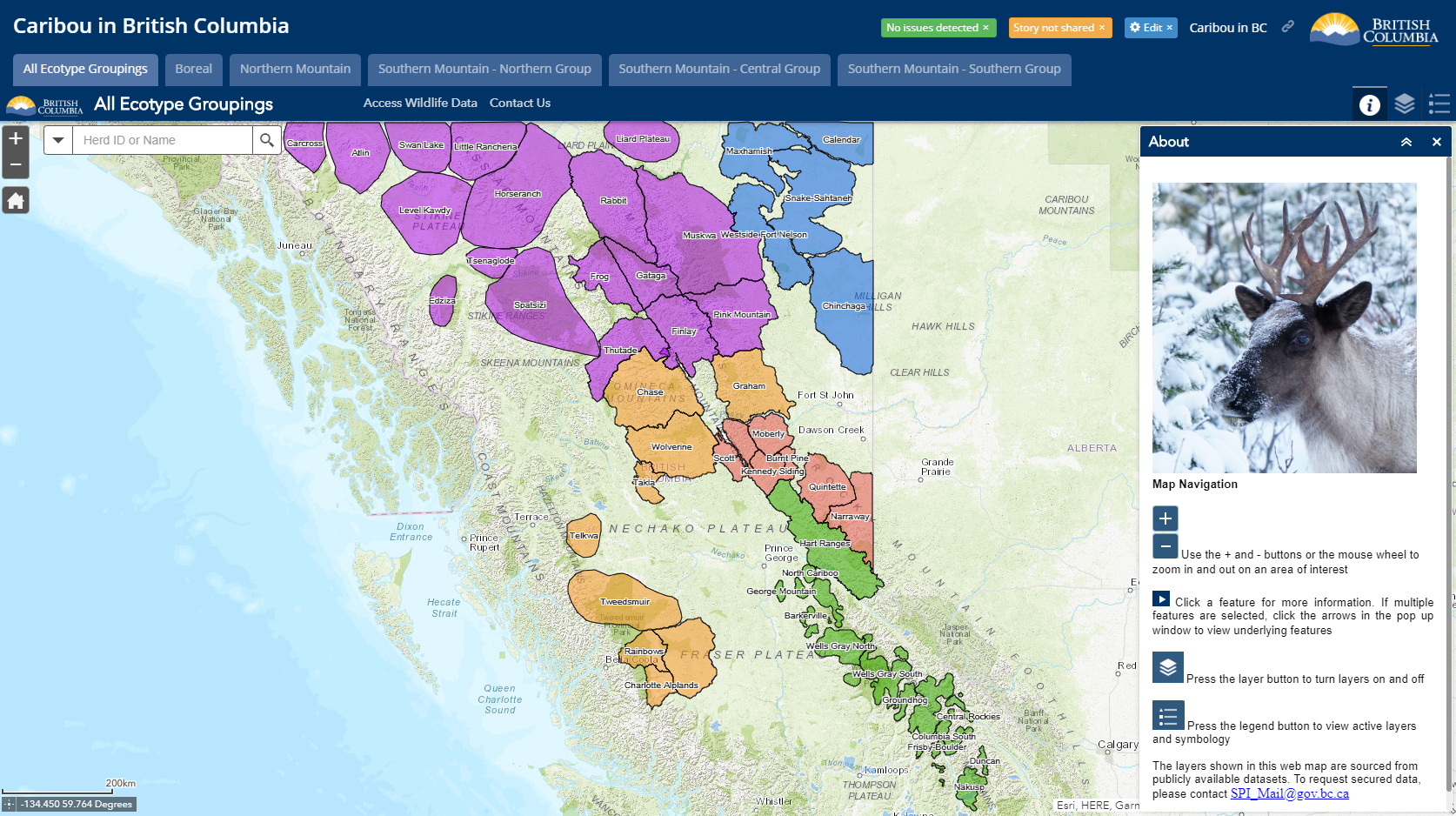