Climate change has a global impact. Effective action requires close collaboration with Indigenous and Non-Indigenous communities, and between governments across Canada and around the world.

B.C. is leading by example in carbon pricing, technology and low-carbon energy. We’re modelling our successes for others and exporting our solutions to the world while growing economic opportunities here at home. Encouraging our trading partners to adopt similar policies builds global climate-action momentum and combats potential competitive issues for our businesses and industry.

With the first broad-based carbon tax in North America, B.C. has proved that it is possible to reduce emissions while transitioning to a clean economy.

Governments are also learning from our achievement in becoming the first carbon neutral government in North America.

To leverage our experience and to drive further action, B.C. is building and strengthening existing partnerships at home, across the country, and around the world. 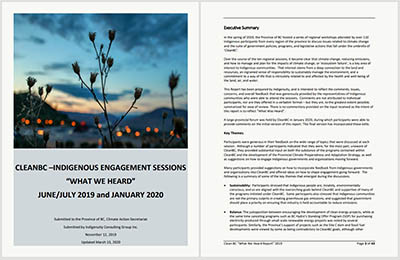 Read about What We Heard (PDF) at CleanBC Indigenous engagement sessions.