Management of the Douglas-fir beetle

This framework describes the decisions and steps — from initial sketch maps to follow-up inspections.

These depend on a several factors:

Ground surveys are the necessary follow-up to aerial surveys and prerequisite to control action. All mapped infestations of three or more infested trees should be ground-checked to verify beetle activity and determine the infestation size.

Adults bore through the bark of Douglas-fir and bore long galleries parallel to the grain of the inner bark to lay their eggs. Reddish boring dust may appear in bark crevices or on the trunk. Adult beetles rarely attack the bottom of the bole, making identification difficult. Wood borers and carpenter ants are commonly active at the base of the tree and their boring dust will appear whitish-red (due to wood sawdust present). Pitch tubes are not formed, but the tree may exude resin from attacks in the upper trunk (”pitch streamers”).

Foliage of killed trees turns from green to light yellow then orange to bright red, usually by the spring of the year following the attack. Colour change can take up to 15 months, which can delay identification of infested trees. Red needles may remain for up to two years after an attack, and aerial spotting of these "redtops" helps to determine the extent of an outbreak.

Douglas-fir beetles normally infest downed, damaged or stressed trees. As populations increase they will ”mass attack” vigorous trees. Trees die when the flow of nutrients and water between the roots and needles is blocked by feeding larvae and by dead sapwood cells killed by the blue-stain fungi carried by adult Douglas-fir beetles. On the coast, it often takes two years of attack to kill a tree (partial or "strip" attack usually occurs the first year).

Attacks by secondary bark beetles may produce boring dust in bark crevices.  The flat- and round-headed wood borers (family Buprestidae) often bore bark and wood near the base of Douglas-fir trees. Boring dust will appear creamy-red due to the presence of wood in their boring dust. Carpenter ants also commonly bore at the tree base and will also have whitish boring dust. The Douglas-fir pole beetle is usually found in the smaller diameter trees in the upper portion of the stem. It can be distinguished from the Douglas-fir beetle by its finer boring dust and different gallery patterns. Careful attention to boring dust colour and gallery patterns is necessary to avoid confusing these insects with Douglas-fir beetle.

Selection of an appropriate option depends on stand condition, level of infestation, condition of adjacent stands, existence of access, and management objectives for the area. Four main control methods for Douglas-fir beetle are available:

Hazard rating identifies stands where substantial losses can be expected if an outbreak occurs, and which are highly susceptible to attack. Once all Douglas-fir stands in an area have been rated, resources can be directed to those with the highest hazard, so losses can be minimized. Hazard rating considers stand age, host basal area, stand density, elevation, and other factors.

Stand risk is the probability the Douglas-fir stand will be attacked, based on proximity an infestation. Risk of attack may be determined by comparing survey information on infestations with a forest cover map coded for hazard.

After hazard and risk ratings are completed, management strategies can be developed to minimize beetle losses in priority stands. Danger ratings, or immediate priorities for treatment or management, may be identified by combining hazard and risk. 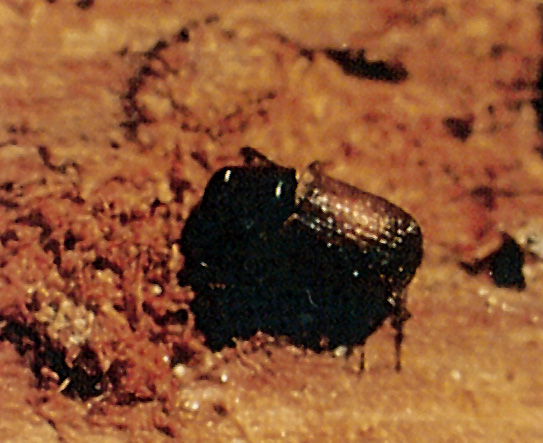 Size: tiny – 4.4 to 7 millimetres long (about half a centimetre)