The Douglas-fir beetle is the principal killer of mature Douglas-fir in B.C. It usually attacks weakened or dying trees, but occasionally its populations increase to the extent that it infests and kills large numbers of healthy trees.

This beetle is most common in B.C.'s Interior. Though it can be found in coastal forests, it rarely causes the large-scale damage seen inland.

It attacks its host in early summer. The beetle usually attacks weakened trees (for example, drought or wildfire damage) or trees blown down by windstorms. When it attacks healthy trees, it targets the largest and oldest first.

Native to North America, this insect is found throughout the range of the Douglas-fir, its principal host. Large diameter, mature Douglas-fir trees are attacked.

Adult Douglas-fir beetles are dark brown to black with reddish wing covers, and are tiny (about 4.4mm to 7mm long). The life cycle is usually one year, and two broods may be produced.

The bark beetle species have similar life cycles, progressing from egg through four larval instars to pupa and finally to adult.

Trees are killed when the flow of food and water between roots and needles is blocked by feeding larvae and by dead sapwood cells killed by the blue-stain fungi carried by the Douglas-fir beetle adults.

The beetles' life cycle is as follows:

The timing of life-cycle events for any species of bark beetle can vary from year to year and from location to location due to variations in climate and local weather.

The action of the larval feeding in the phloem and fungal colonization of the sapwood completely blocks the water uptake and kills the infested tree. In some cases, only one side of a tree will be successfully attacked (strip attack); this tree will survive unless living portions are reattacked in subsequent years.

Foliage of killed trees turns from green to light yellow then orange to bright red, usually by the spring of the year following the attack. Colour change can take up to 15 months, which can delay identification of infested trees. Red needles may remain for up to two years after an attack, and aerial spotting of these "redtops" helps to determine the extent of an outbreak.

Adults and larvae boring under the bark leads to the accumulation of reddish boring dust, or frass, in the bark crevices and at the base of the tree. Pitch tubes are not formed, but the tree may exude resin from attacks in the upper trunk (”pitch streamers”).

Mining by other wood boring insects (family Buprestidae and family Cerambycidae) or carpenter ants can be mistaken for Douglas-fir beetle. These other insects can be distinguished from Douglas-fir beetle by the whitish-red colour of their boring dust at the base of the tree.

The Douglas-fir pole beetle is usually found in the smaller diameter trees in the upper portion of the stem. It can be distinguished from the Douglas-fir beetle by its finer boring dust and different gallery patterns.

Careful attention to boring dust colour and gallery patterns is necessary to avoid confusing these insects with Douglas-fir beetle. 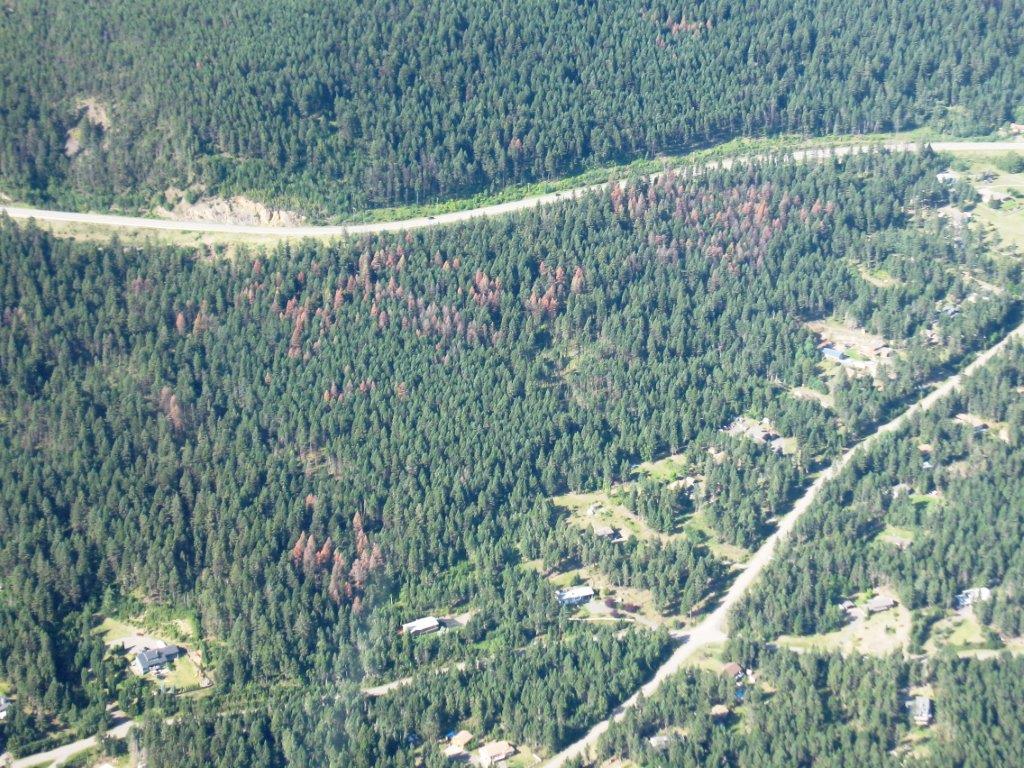 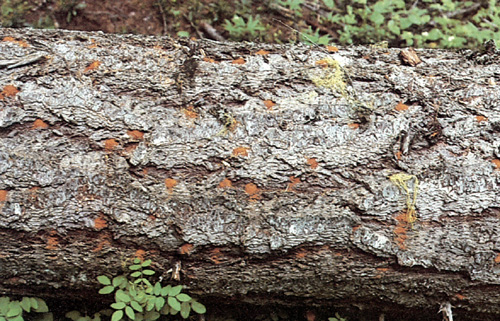 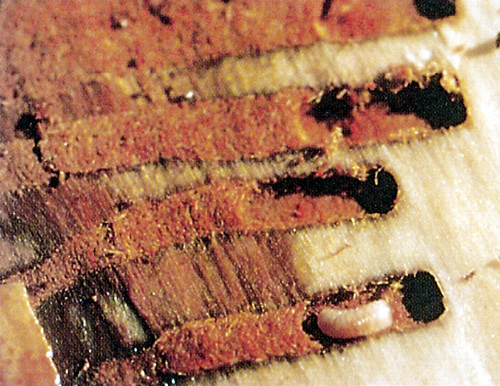 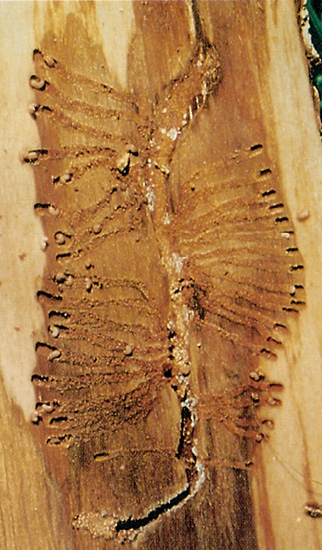 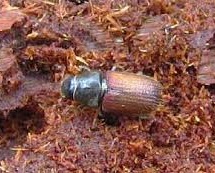 Size: tiny – 4.4 to 7 millimetres long (about half a centimetre)

Frass (fine sawdust) on a tree trunk, an indication that beetles have bored into the tree.