Definition of a Silvicultural System (Part 1)

After completing this chapter you should be able to:

The Meaning of Silviculture

Silviculture is the art and science of controlling the establishment, growth, composition, and quality of forest vegetation for the full range of forest resource objectives.

Successful silviculture depends on clearly defined management objectives. However, silviculture is often confused with managing stands and forests purely for timber. Remember that silviculture is also used to manage forests for wildlife, water, recreation, aesthetics, or any combination of these or other forest uses.

Silvicultural practice consists of the various treatments that may be applied to forest stands to maintain and enhance their utility for any purpose.
David M. Smith (1986)

Silviculture also ensures the long-term continuity of essential ecologic functions, and the health and productivity of forested ecosystems.
Ralph Nyland (1996) 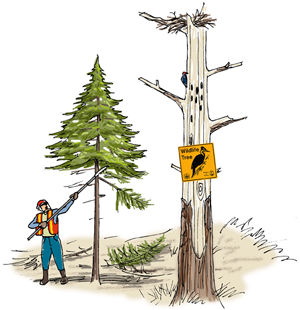 What is a Silvicultural System?

The general aim of silviculture is to ensure that most available growing space is filled with useful plants for as much of the stand's life as is practical. 'Useful plants' often include timber species, but increasingly include forage and other forest vegetation. Silviculture also strives to ensure that the dynamic structure of the stand meets the needs of the landowner at any given point. 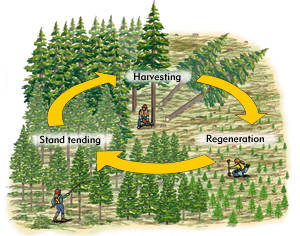 Typical sequence of a silvicultural system

Silviculturists generally deal with far less than perfect stands. Imperfect stands can be improved, but not to ideal conditions even with the best of knowledge. With erroneous knowledge, however, it is quite easy to ruin the ability of a stand to meet the landowner's objectives.
Chadwick Oliver and Bruce Larson (1990)

The Origins of our Silvicultural Systems

The foresters who first started to manage stands in Europe generally sought to regenerate useful species in a manner that would ensure some long-term sustainability. Forestry was born out of necessity, a result of unrestrained exploitation in natural stands which eventually led to severe timber shortages.

As time went by and the foresters closely compared the results of their stand manipulations to changes in natural stands, they observed similar patterns emerging. They saw species regenerating in certain ways, and using specific seedbeds and environments for germination and growth. Building on this basic knowledge of silvics, they likely started to experiment with different cutting patterns, leaving uniform leave-trees at different densities and small openings of differing sizes and shapes.

Eventually they learned that certain species could be managed on certain sites with a similar program of treatments to produce predictable yields over time. They eventually categorized these programs of treatments into the silvicultural systems that we know today.

While the broad terminology of the European experience can work in British Columbia, we must be cautious. The species mixes we manage and the demands of our landowner (i.e., the public) are not necessarily the same as in Europe. Therefore, we must modify the European systems so that they work for our species and circumstances. The European experience, however, is a good place to start. 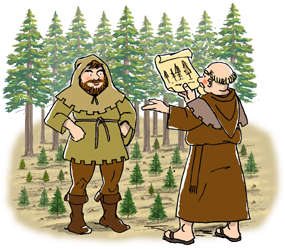 British Columbia silviculturists need an innovative and creative spirit. Formalized textbook approaches, based on the European or U.S. precedents, are not appropriate.
Gordon Weetman (1996)

The transition from one stage in the development of silvicultural systems to another has not been as steady and smooth and unerringly upward as one may infer from any effort to trace the history of silviculture. Rather, it has largely been a trial and error process in which experience and scientifically acquired knowledge and special interests, politics, and the influential views of persuasive foresters have been deflecting or tangential forces.
A.P. Mustian (1973)

What are Stand Structural Objectives

Note: These objectives must be dynamic according to the silvical characteristics of the individual species and the ecological relationships that integrate the species mix to the site.

These stand structural objectives are not easily created. The objective, immediately post-harvest, for a given harvesting entry may be easy enough to prescribe and achieve. However, due to the dynamic nature of forest ecosystems the silviculturist must account for growth and ecological changes to design a long-term vision for stand structure over the life of the stand.

For example, an ungulate winter range may dictate that a certain percentage of crown closure be retained. This management objective may be easily satisfied by some type of commercial thinning in the initial entry. However, it is much more challenging to integrate this objective into a long-term design that incorporates timber management and other objectives, while accounting for the dynamic nature of the stand.

Once stand structural objectives are clearly defined as a long-term vision, the manipulations necessary to achieve these objectives can be described as silvicultural systems. 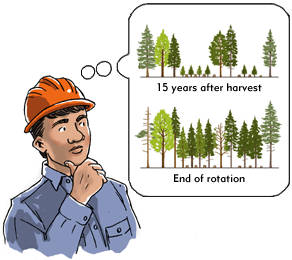 Stand structure is the physical and temporal distribution of trees and other plants in a stand.
Chadwick Oliver and Bruce Larson (1996)

Although even-aged stands often occur naturally, they rarely exist in a pure form. Natural even-aged forests occur after a major disturbance initiates the processes involved in stand regeneration. Often, these stands maintain their even-aged structure until the next major disturbance occurs. In managed even-aged stands, the regeneration period is not greater than 20% of the length of a standard managed rotation. This time period will be reflected in the age difference between the oldest and youngest trees.

For managed even-aged stands, regeneration cuttings are concentrated near the end of the rotation. Most forests in western North America are managed this way because it conforms to the development of many of these forests, and because even-aged management is easier to plan, conduct, and regulate. Large-scale natural disturbances, such as wildfire, have naturally favoured even-aged stands of seral species with a niche closely associated with these disturbance types.

An uneven-aged stand is a mosaic of tiny even-aged clumps and scattered individuals woven together through a perpetual cycle of random disturbances. In nature these disturbances contribute to scattered mortality, allowing for temporal waves of different age-classes dispersed throughout the stand. Such disturbances may include light-intensity fires, windthrow, and insect or disease attacks. Some authors also refer to these stands as "multi-cohort" or "all-aged" stands. In nature a pure, "uneven-aged" stand probably does not exist as age classes develop with a high degree of randomness in space and time.

Uneven-aged stands have at least three well-represented and well-defined age classes, differing in height, age, and diameter. Often these classes can be broadly defined as: regeneration (or regeneration and sapling), pole, and mature (or small and large sawtimber).

Uneven-aged stands have an uneven and highly broken or irregular canopy (often with many gaps). This broken canopy allows for greater light penetration and encourages deeper crowns and greater vertical structure in a stand. Most stems occur in the smallest age/size class, as regeneration quickly fills the frequent canopy gaps. This number declines through normal species competition as age/size classes increase, to the point where the largest age/size classes can be quite scattered (although distribution may be highly regular). Because regeneration is initiated in small gaps, more shade-tolerant tree species are generally favoured.

In its ideal form, where diameters approximate age, distribution of diameters in uneven-aged management will approach the classic inverted-J form. This means that the largest number of stems fall in the smallest diameter classes. As you progress through the diameter classes, the number of stems per hectare drops in an inverted geometric fashion, giving a dipping curve relationship which looks like the mirror image of a "J" without the top.

When you visualize the development of your stand, how long do you project into the future? 20 years? 50 years? 100 years?

What are the barriers to this type of planning?

Clearly understanding the meaning of these two objectives for age-class structure is important. Differentiate between truly even-aged and uneven-aged stands using the criteria listed in the following table:

Remember the Intent of the Silvicultural System

Silvicultural systems were developed to reflect a sense of conservation, or to provide for predictable future yields of goods and values from a stand even while harvesting some of those goods now. Although long-term sustainability may become an ethical issue for individual landowners and a political issue on publicly owned lands, this concept is central to the practice of forestry itself. 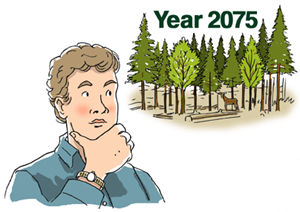 Terms are just words. The actions associated with the terms are much more important than the actual terms. A site plan that describes an effective, well-conceived set of treatments to meet clear long-term objectives is much more important than applying a label to the prescription. David Smith (1986) carefully points out that a good silvicultural system is not likely to be something that has already been invented and can simply be selected ready-made from classifications or schematic descriptions.

However, terms can be useful in providing information to others in a concise form. This concise information can be very important for understanding a prescription when reviewing the entire document is not possible.

For this course we have chosen terminology that is well accepted worldwide and straightforward to use. We acknowledge that variations of some of the terms may be equally as valid, and suggest that understanding the concepts behind these systems becomes much more important. The terms used here have been incorporated into provincial guidebooks and the corporate information system for the province.

A silvicultural system is a planned program of treatments during the whole life of a stand designed to achieve specific stand structural objectives.