MLAs represent the interests of their constituents (the citizens that reside in the MLA’s electoral area), by participating in political debates during sessions of the Legislative Assembly.

MLAs not only represent their electoral area and their consituents, they can be a member of cabinet committees, and be appointed to a ministerial role of one of the government's ministries.

Find out more about the Members of the Legislative Assemby.

Meet the Members of the Legislative Assembly. 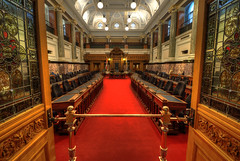