Steelhead are an anadromous form of the rainbow trout, meaning, they spend their juvenile life in freshwater (1-4 years) and then migrate to the ocean for 2-4 years and then return to their home streams to spawn. Steelhead are unique among the Pacific salmon in that they have the ability to spawn more than once (called iteroparity). 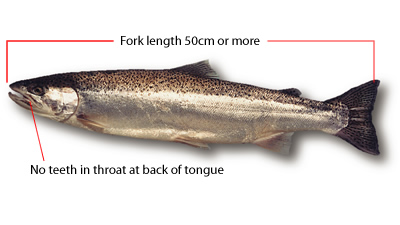 Steelhead are frequently found in systems that have freshwater resident populations of rainbow trout.  Under the right conditions, steelhead can breed with resident rainbow trout with mixed outcomes.  Offspring from this pairing can result in fewer steelhead produced but may also act as a potential repository for later steelhead production. This is an active area of research.

After steelhead return from sea, adult steelhead are easy to distinguish from adult rainbow trout that reside with them because steelhead are much bigger.  For the purpose of implementing freshwater sport fishing regulations, steelhead/rainbow trout caught in steelhead bearing waterbodies are classified as steelhead if their fork length exceeds 50 cm.

In 2018, citing critically low spawning returns, the Committee on the Status of Endangered Wildlife in Canada (COSEWIC) concluded that Interior Fraser Steelhead were at imminent risk of extinction. Recognising risks to steelhead populations, the province has regulated catch and release only fisheries for Wild steelhead since 1997. The province continues to actively pursue recovery through a range of efforts.

For the Thompson watershed, late-run summer spawning population estimate for 2021 was updated December 1, 2021 is 68. For the Chilcotin watershed, the 2021 late-run summer spawning population estimate was updated at the same time to 32. These values reflect the lowest observed over a 45-year monitoring time frame for the Thompson watershed and the second lowest value observed for the Chilcotin watershed over a 51-year monitoring time frame. BC has been taking recovery actions for years. The Province is currently undertaking the development of a comprehensive population-recovery plan, working with all parties who impact IFS. The BC Action Plan and Activities Report posted below provides details on this work.

Provincial Framework for Steelhead Management in BC [PDF 420 KB]