Kaslo: The little town that did — B.C.’s rural digital legend 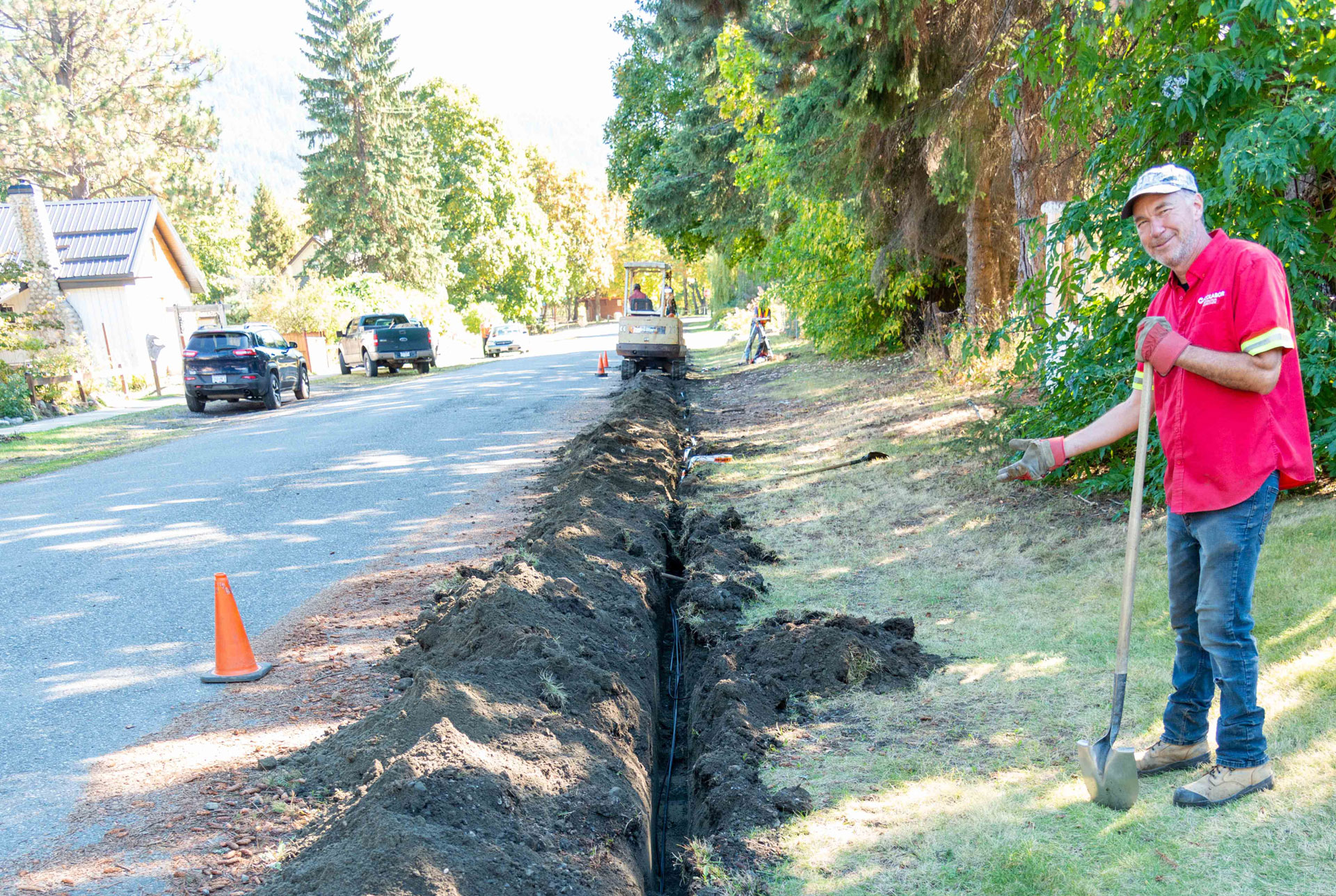 The Kaslo infoNet Society (KiN), a rural community-controlled non-profit, is celebrating an innovation success story; a story of bringing urban-quality bandwidth to Kaslo and the surrounding region. Kaslo overcame multiple geographic and economic challenges in its quest to establish quality connectivity. “We set out to do what would be considered impossible,” explains Donald Scarlett, chair of KiN, but with the work of a few dedicated citizens and the help of the Province, Kaslo is now a frontrunner in digital innovation.

The Village of Kaslo, located in the Kootenays, has a population of only 968 people. It is set among forests, mountains and lakes and is far from any urban centres. These conditions create multiple challenges – challenges that are common among B.C. communities - along the path to quality connectivity. Internet service providers often hesitate to invest in small communities, and geographic features like mountains and lakes complicate internet infrastructure-building.

Kaslo had an advantage, because public investment in regional transport infrastructure – the “backbone” of connectivity - began in the area in 2012 when Columbia Basin Trust made a strategic decision to create a ‘digital superhighway’ for the region. To enable the long-term vision, the trust established the Columbia Basin Broadband Corporation, and, over time, has been expanding the backbone required to reach communities in the region, relying on organizations like KiN to champion the ‘last mile’ or in-community service access.

KiN, which would later create the last-mile network, was brought to life in 1996 in the early days of dialup Internet.  Two teachers with a passion for community service and a bit of technical skill built a network of support to solve an affordability issue. Over the past two and half decades, KiN’s services have changed and evolved along with the technology.

“[People couldn’t] live here and participate in a digital economy. I was presented with two choices … go back to the city, or solve the problem.” - Tim Ryan, board member of KiN

KiN, with its technical expertise, partnered with the Village of Kaslo and the Columbia Basin Broadband Corporation to pursue a solution to the community’s connectivity challenge from 2014 to 2019. Construction began on the fibre project to enable faster service and expand KiN’s service area. It wasn’t possible to bring a fibre cable over the mountains or through them, so they looked at using a submarine fibre cable. The Columbia Basin Trust had an established network in Balfour, a lakeside community about 35 km from Kaslo, which was close enough to reach. To access the network, KiN put a submarine fibre cable in the lake that connected the two communities. This cable was the last-mile solution that brought faster, cheaper internet to the streets of Kaslo. 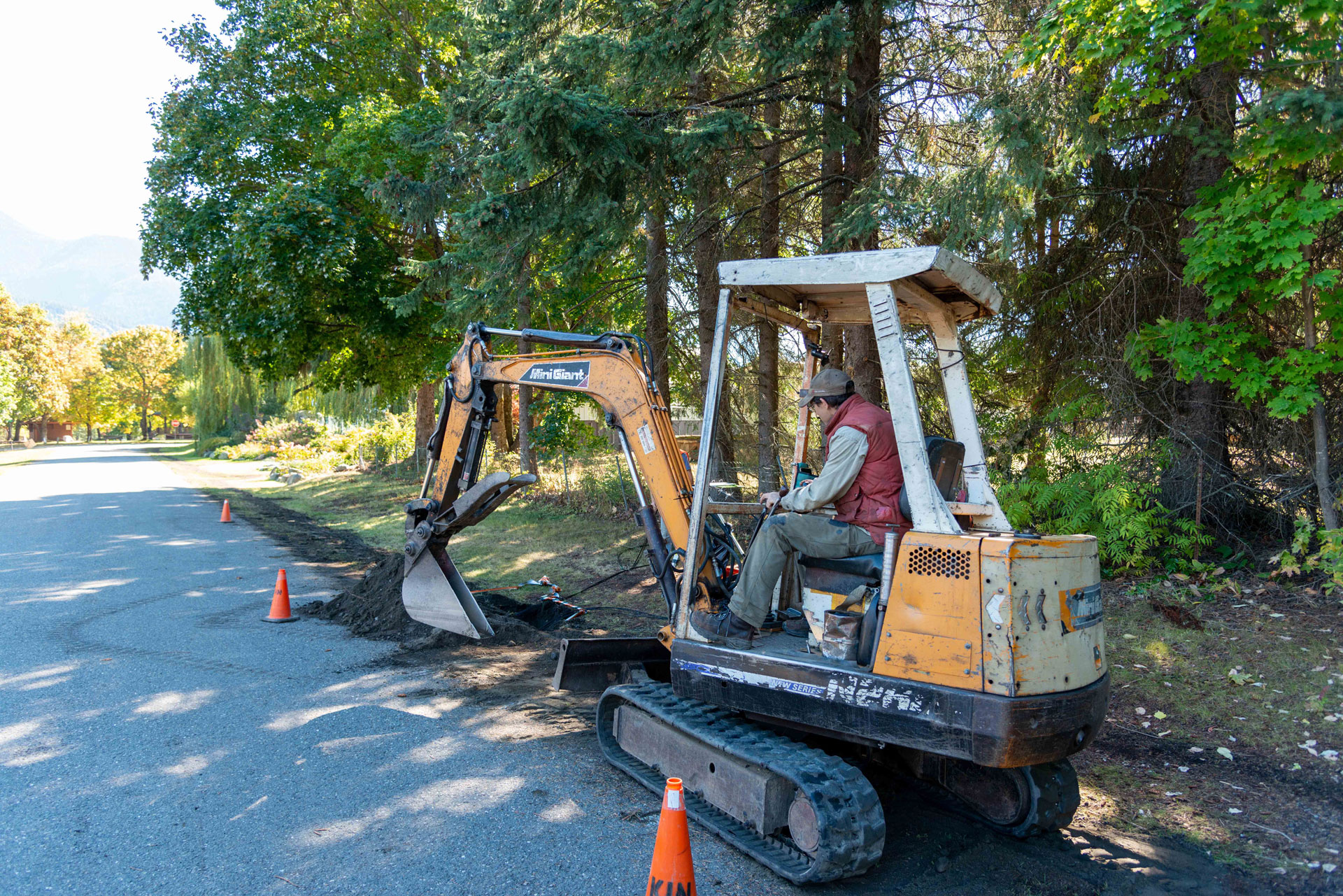 Of course, this major infrastructure project required funding. To complete the project, KiN pursued a grant from the Connecting British Columbia program, a multi-year grant program funded by the Province and administered by Northern Development Initiative Trust.

“People here have come to understand that Kaslo infoNet Society is here for the long haul.” - Randy Morse, director of communications at the BC Rural Centre

“There is a perception that that fibre connectivity is complex … (but) it’s 90% ditch-digging and 10% technology. The technology itself is readily available and can be implemented by just about any community.” - Tim Ryan, board member of KiN

Education is the economic-development gateway to creative solutions and investment attraction. 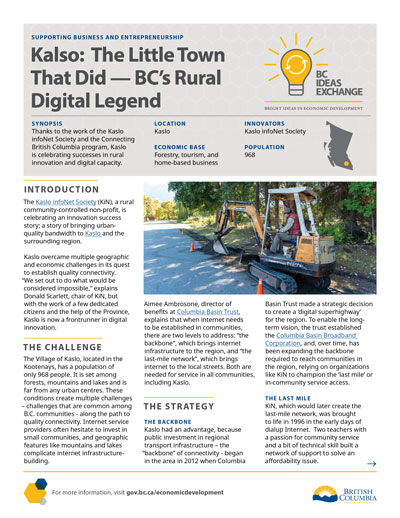