Karst is a distinctive topography in which the landscape is largely shaped by the dissolving action of water mainly on carbonate bedrock (usually limestone, dolomite, or marble). This geological process, occurring over many thousands of years, results in unusual surface and subsurface features ranging from sinkholes, vertical shafts, disappearing streams, and springs, to complex underground drainage systems and caves.

How karst is formed

The process of karst formation involves what is referred to as "the carbon dioxide (CO2) cascade." As rain falls through the atmosphere, it picks up CO2 which dissolves in the droplets. Once the rain hits the ground, it percolates through the soil and picks up more CO2 to form a weak solution of carbonic acid: H2O + CO2 = H2CO3. The infiltrating water naturally exploits any cracks or crevices in the rock. Over long periods, with a continuous supply of CO2-enriched water, carbonate bedrock begins to dissolve. Openings in the bedrock increase in size and an underground drainage system begins to develop, allowing more water to pass, further accelerating the formation of karst. Eventually this process leads to the development of subsurface caves.

Distribution of karst in British Columbia

British Columbia is blessed with an abundance of world-class karst, particularly in the Rocky Mountains and on Vancouver Island. Other areas of karst development occur on Haida Gwaii, along the coastal mainland, in the interior mountain ranges, the Cariboo Mountains, and in Northwest B.C.

The Rocky Mountains contain the most extensive areas of soluble rock in the province, as well as Canada's longest and deepest documented caves. Subsurface drainage systems, springs, and surface features, such as sinkholes, are common throughout the Rockies, with some of the most notable karst terrain occurring on plateaus as high as 2000 metres.

The full extent and significance of karst in the Rocky Mountains and other parts of the interior are not well understood. Isolated locations, limited ground access, and extreme winter climates have made the exploration and documentation of interior karst lands difficult.

Most of the karst on the coast occurs within the coastal western hemlock biogeoclimatic zone where the major tree species are western hemlock and amabilis fir, with some western redcedar, Sitka spruce, and yellow-cedar. These coastal forest karst ecosystems are often characterized by large mature trees, diverse plant and animal communities, highly productive aquatic systems, well-developed subsurface drainage, and extensive surface karst and underlying cave resources.

Coastal forest karst ecosystems are commonly more productive than similar forest sites on non-karst terrain. This increased productivity can be largely attributed to well-drained soils and the nutrient cycling associated with karst. As carbonate bedrock is dissolved by penetrating water, it releases CO2, calcium carbonate, and micro-nutrients into the soil, encouraging plant growth and development. The level of productivity appears to be directly related to the extent of surface and subsurface connections.

Karst ecosystems often support unusual or rare plant and animal species, both on the surface and underground. Certain species of ferns and mosses prefer or, in some cases, require a limestone substrate on which to grow. Other fern species have adapted to growing in the cool, moist twilight conditions of cave entrances.

Many wildlife species use various karst features for habitat. Caves are used intermittently by large carnivores for shelter or resting. Birds and small mammals, such as woodrats, often nest in caves and other cavities. Elk and deer commonly bed down in the vicinity of cave entrances during summer when the air from caves is cooler, and during the winter when cave air is generally warmer than surrounding temperatures. Caves, and their stable environments, can be critically important habitat for bat species that depend on them for roosting and hibernation.

Some karst-dependent species, known as troglobites, have evolved to living exclusively in the total darkness of caves. In B.C., the only troglobite identified to date is a freshwater crustacean found in underground pools in caves on Vancouver Island. More common are troglophiles, which are species found living both inside and outside caves. Some individual troglophiles may complete their entire life cycle within a cave, while other members of the same species live their lives outside caves. Examples of troglophiles in B.C. include certain species of salamanders, spiders, and crickets.

Research conducted in southeast Alaska suggests that karst stream systems play a significant role in the productivity of downstream aquatic habitat. The research indicates that karst can increase fish productivity in the following ways:

In addition, karst aquifers contribute to human water supplies in many parts of the world. Although relatively little is known about B.C.'s karst groundwater systems, it is likely that they too play an important role in some community watersheds.

The subsurface drainage systems of karst lack many of the natural cleansing and filtering mechanisms of surface streams. As a result, harmful substances or materials introduced into karst waters have the potential to seriously affect karst environments, human water supplies, and important fish-rearing streams.

Karst environments offer a variety of scientific and educational opportunities. Karst provides scientists with a relatively undisturbed window into landform evolution, past environments, and climate change through the study of cave morphology and sediments.

In the fields of archaeology and paleontology, B.C. karst caves have made some significant contributions. The natural environment of karst caves - alkaline conditions, cool temperatures, the absence of light, and difficult access - usually makes for undisturbed archaeological sites and well-preserved animal remains.

In addition, some of the marmot bones found in the Vancouver Island caves exhibit cut markings that could only have been made by human tools. These archaeological sites are the first on the northwest coast discovered in the mountainous subalpine region-all others have been coastal sites.

As the archaeological evidence suggests, karst played a significant role in the lives of many aboriginal peoples in the past. Karst caves were not only used for shelter, but were also considered by some groups to be sacred places for burial and ceremonial purposes.

Unusual limestone surface features often played a role in aboriginal mythology, and the water from karst springs was viewed as having special properties. In many cases, the productivity of karst terrain also benefited aboriginal peoples by supplying large trees for dugouts, construction materials, or totem poles, and by providing excellent growing sites for various shrubs and herbs used for food and medicines.

The unique karst features of B.C. attract recreationists and caving enthusiasts from around the world. The extensive karst systems in the Rocky Mountains are very popular with local and international visitors. Vancouver Island is also a popular destination, attracting visitors from around the globe to view surface and subsurface karst. In fact, together with southeast Alaska, it is one of the last places on earth where areas of undisturbed coniferous coastal temperate rain forest can be experienced along with such a diverse range of karst resources.

Karst is recognized as a highly valuable, non-renewable resource that can be especially vulnerable to disturbance, more so than many other land resources. The primary reason for this higher level of sensitivity is the three-dimensional nature of karst. The intricate relationship between karst's unique surface characteristics and the subsurface caves and hydrology make for a delicately balanced system. Industrial activities, such as rock quarrying or forestry, if not properly conducted, can lead to excessive soil erosion, destruction of surface and subsurface karst features, changes in groundwater flows, and contamination, sedimentation, or clogging of underground and surface streams.

When conducting forestry operations in forest karst ecosystems or associated upland areas, extra care must be taken to ensure that karst values and forest productivity remain intact. Recreational pursuits in karst terrain also need to be monitored and managed to protect the resource from overuse or other damage. 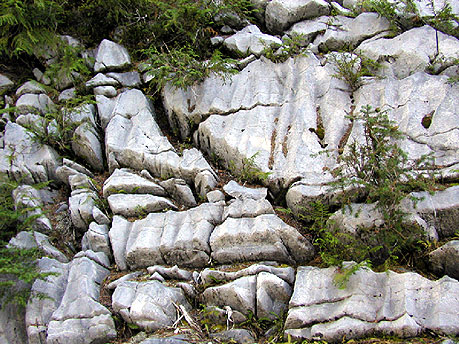