What causes an algae bloom?

Algae are a natural part of all aquatic ecosystems, but prolific growth can cause a dense mass of algae (called a bloom) to form.

Algae blooms can occur when a combination of suitable environmental conditions exist for abundant algal growth (e.g., increased nutrients, warmer temperature, abundant light, and stable wind conditions). When these conditions are favorable for one species over another, it allows for one organism to become dominant and form a bloom.

Some human activities (such as agricultural run-off or poorly functioning septic systems) can make blooms more likely, and excessive amounts of nutrients within a lake can markedly increase the risk and severity of algal blooms. However, excessive nutrients may not lead to a bloom if other factors are unfavourable. For example, in a turbid shallow lake there may be insufficient light to support a bloom despite having high nutrient concentrations and warm water.

There are many causes for algal blooms in freshwaters and it is often difficult to pinpoint specific reasons why a bloom forms. In many cases, a set of unique environmental conditions occur in a waterbody, which can lead to a particular species dominating and triggering a bloom.

Algal blooms in BC most often occur in the late-summer and early-fall. However, they can occur at any time of year, even under ice.

Blooms typically last from several days to a few weeks, but can sometimes last as long as several months if environmental conditions are favourable.

Phosphorus and nitrogen are essential to algae production, and these nutrients encourage the growth of algae in waterbodies. Phosphorus is the key nutrient limiting algal growth in the majority of BC lakes. Increased concentrations of nutrients often lead to increased algal production, and increased risk of a bloom forming. This process of nutrient enrichment in a waterbody is called eutrophication, which can be exacerbated by anthropogenic influences such as:

Note that algae blooms can also occur in waterbodies where nutrients are fairly low, but are more common when nutrient concentrations, especially phosphorus, are high.

Blooms usually develop during the warmer months of the year when water temperatures are higher. Cyanobacteria prefer warmer water and have a competitive advantage over other algae at temperatures over 25°C.

In the spring when surface water begins to warm, many deeper lakes begin to thermally stratify (warm surface layer and colder bottom layer). As the warming progresses throughout the summer this temperature difference creates a density stratification in the water column. This creates a beneficial situation for algae and cyanobacteria to grow in a warm environment with increased light near the surface.

Sufficient light is required for algae to grow and form high enough densities to bloom. The availability of light is largely influenced by the light penetration and mixing dynamics within the water body.

Public domain and creative commons icons from the Noun Project

All other images are from Ministry of Environment and Climate Change Strategy staff files.

Send us your algae bloom observation 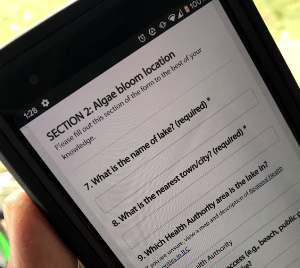 Use our online Algae Watch Observation submission form to send us your algae bloom photos and description.

If you have concerns that are immediate and related to drinking and/or recreational water use, please contact your local health authority.

To report a spill or other contamination source, contact the Provincial Emergency Program spill reporting line at 1-800-663-3456.

To report an act of pollution, contact the RAPP (Report All Poachers and Polluters) Line at 1-877-952-RAPP (7277), or report a violation online.