The Hullcar aquifer is a drinking water source for the Hullcar Valley for the Steele Springs Waterworks District (SSWD), a small water system located within the Township of Spallumcheen which provides water for up to 250 residents, through 53 connections. Interior Health is also aware of an additional 22 private water wells, which draw water from the Hullcar aquifer and are not connected to the Steele Springs Waterworks system.

The Ministry of Environment and Climate Change Strategy (ENV) is working collaboratively with the Interior Health Authority, Ministry of Agriculture (AGRI) and the Ministry of Forests, Lands, Natural Resource Operations and Rural Development (FLNRORD) on water quality issues within the aquifer. This cross-government team is focused on identifying significant sources of pollutants, assessing a variety of approaches to resolving the water quality issue, as well as conducting monitoring of the activities above the aquifer.

On August 13, 2019, Environmental Protection Officers inspected Hullcar Valley sites that were under the Environmental Management Act Pollution Abatement and Pollution Prevention Orders to assess compliance with outstanding requirements in the Orders. Based on the results of these inspections, it was confirmed that conditions prescribed in the Orders have been satisfied. Effective September 24, 2019, the Orders are no longer in effect.

The new Code of Practice for Agricultural Environmental Management came into effect on February 28, 2019. The new Code of Practice applies to all agricultural operations in B.C., from small hobby farms to large commercial operations and aims to ensure that drinking water, watercourses and air are protected. The Code is being implemented in a phased manner, with the Hullcar Valley being the first area in B.C.

Drinking water standards are set by the Federal-Provincial-Territorial Committee on Drinking Water and published by Health Canada. These standards come in the form of drinking water guidelines that identify levels of parameters to ensure the water is safe to drink. These guidelines are used by every jurisdiction in Canada and are the basis for establishing drinking water quality requirements for all Canadians. More information can be found on the Health Canada website.

Sampling of the Steele Springs drinking water source has shown increasing nitrate levels from 8.8 mg/L in January 2014 to 13.3 mg/L in February 2016. The Canadian Drinking Water standard for nitrates is 10 mg/L. On July 14, 2014, the Interior Health Authority issued a Water Quality Advisory to all residents of the Township of Spallumcheen that reside within the designated area of the Hullcar Aquifers (102 and 103). The advisory stated:

The drinking water advisory was issued due to the level of Nitrates. Nitrate are widespread in the environment. They are naturally produced by the oxidation of nitrogen by microorganisms in plants, soil and water. However, the most common sources of nitrate substances are human activities, including agricultural activities, wastewater treatment, and discharges from industrial processes and motor vehicles. Most nitrate reduction in the soil occurs through plant uptake and utilization, whereas surplus nitrates readily leach into groundwater. The nitrate ion is negatively charged and does not adsorb to clay minerals or organic matter in soils unless they have a significant anion exchange capacity, which is uncommon in Canada. Generally, it is assumed that nitrate will not adsorb to soil particles and will have a high potential for mobility. (Source: Health Canada Water Quality Guideline for Nitrates-Nitrite)

Hullcar aquifer 103 is unconfined and approximately 14 km2 in size (defined by area of groundwater development). Water levels vary from 1.5 to 14 metres below the surface; this depth information is based on data within the BC WELLS Database. The thickness of aquifer 103 varies from three to 45 meters. The aquifer has been classified by the Ministry of Environment as IIA (moderately developed, high vulnerability), due to the moderate level of groundwater development and the high vulnerability to contamination.

The health impact of nitrates is methaemoglobinemia. Scientific studies show cases of methaemoglobinemia occurring in bottle-fed infants, which are the vulnerable population for these effects. Recent evidence from animal and human studies suggests that effects on thyroid gland function are also an end-point of concern. Studies have seen an effect in school-age children, but no study has looked at this health effect in infants, who would also be expected to be the most vulnerable population for this health effect. In addition, current science suggests an association between cancer and exposure to nitrates in drinking water when conditions result in nitrosation within the human body. (Source: Health Canada Water Quality Guideline for Nitrates-Nitrite)

The Ministry of Environment has acted to identify and quantify potential sources of nitrates by collecting and reviewing water quality sample data within the Hullcar Valley since 2014. An Inspector’s Order was issued to HS Jansen Dairy and an Information Order to Regehr Feedlot which set operational requirements for both agricultural operators. The ministry is currently leading the inter-ministry response and, is/has actioned each item in the Inter-ministry Hullcar Aquifer Working Group Action Plan.

* Clcahl is the name used by the Splats’in people for their traditional territory around the Salmon River.

On August 2, 2017, an independent review of the Hullcar Aquifer was announced with the goal of ensuring practices from the agricultural sector are aligned the provision and protection of clean, safe drinking water for all British Columbians.

The review of the Hullcar Aquifer situation is meant to inform the development of new approaches and inform future decisions around agricultural waste management specifically in the Hullcar Valley as well as have benefits to other areas of British Columbia where there are threats to drinking water from neighbouring agricultural waste management activities. An independent reviewer, Dr. Oliver Brandes, led the review with a team from the POLIS Project on Ecological Governance. Government staff from the ministries of Environment and Climate Change Strategy (ENV) and Agriculture (AGRI) supported the review.

The POLIS Recommendations Report received by government can be found at From Crisis to Solutions: Towards Better Source Water Protection and Nutrient Management in the Hullcar Valley (PDF). Recommendations focus on law and governance reform to improve source water protection. Comments regarding the report were collected and are available as a Summary of Comments received on POLIS report (PDF).

In addition to the release of the Recommendations Report, a new Agriculture Waste Control Regulation Intentions Paper has been released on the Agriculture Environmental Management site and a 45 day public consultation period was open until January 15, 2018.

Transparency is critical for understanding the situation. Government documents produced to inform the review can be found below. Many of these documents are referenced in POLIS’ Recommendation Report.

These documents are sorted by contributing ministry. All documents below are PDFs unless otherwise stated:

The purpose of all of the orders is to abate and prevent agricultural waste from entering Hullcar Aquifer 103 as the usefulness of the groundwater from the aquifer is currently compromised due to high level of nitrate in Steele Springs drinking water. Ministry staff will use orders where it is appropriate to ensure human health and the environment are protected.

The following documents regarding Nutrient Management Plans and soil, moisture and manure data are subject to copyright and are being disclosed to the public under section 25 of the Freedom of Information and Protection of Privacy Act, as permitted under section 32.1(1) of the Copyright Act. This disclosure does not constitute a license to exercise the rights of the copyright owner, as set out in the Copyright Act, including the right to reproduce, distribute and publish these documents.

Orders no longer in effect 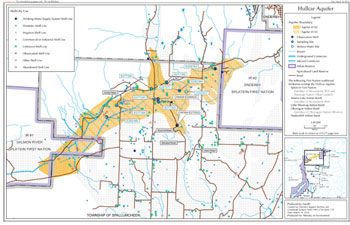 Click on the image to see a full page map of the Hullcar aquifer.

The Aquifer Maps Guide may be a helpful resource to understanding the above map.

This is where you can view the most recent updates.

To Report All Poachers and Polluters (RAPP)

General contact information for this site is available below.