How can one piece of equipment create jobs, generate economic opportunities for the whole community, and help the environment?

Creston Valley-Kootenay Lake is an important agricultural region in B.C., generating $27.5 million each year – and that's on only 50% of the land available for production. In early 2016, Fields Forward held a two-day forum in the Creston Valley to look at ways to re-localize the food system while creating meaningful, local jobs and fulfilling the agricultural potential of the valley.

One barrier that local producers identified was the cost of purchasing infrastructure that would allow them to produce value-added agrifood products – such as fruit juice, which can be sold at a higher margin than fruit itself. Although a mobile press travelled to the Creston Valley a few days a year, it barely scratched the surface of all the fruit that could be pressed.

Fast-forward to fall 2017, and the Kootenay mobile press has processed more than 526,000 pounds of fruit, produced almost 120,000 litres of juice, diverted 176,000 pounds of culled fruit from the landfill, and produced a host of other benefits for the community.

Fields Forward raised close to $500,000 to purchase a second-hand mobile fruit and vegetable press with support from the Town of Creston, the Regional District of Central Kootenay, Southern Interior Development Initiative Trust and B.C.'s Rural Dividend Fund.  The mobile press arrived in late spring 2017 and, once six staff were hired and trained to operate the press, it was full speed ahead!

The mobile press is an industrial-scale unit that can process, pasteurize and package 1,500 litres of apple, pear, carrot, beet, cherry, or berry juice a day. 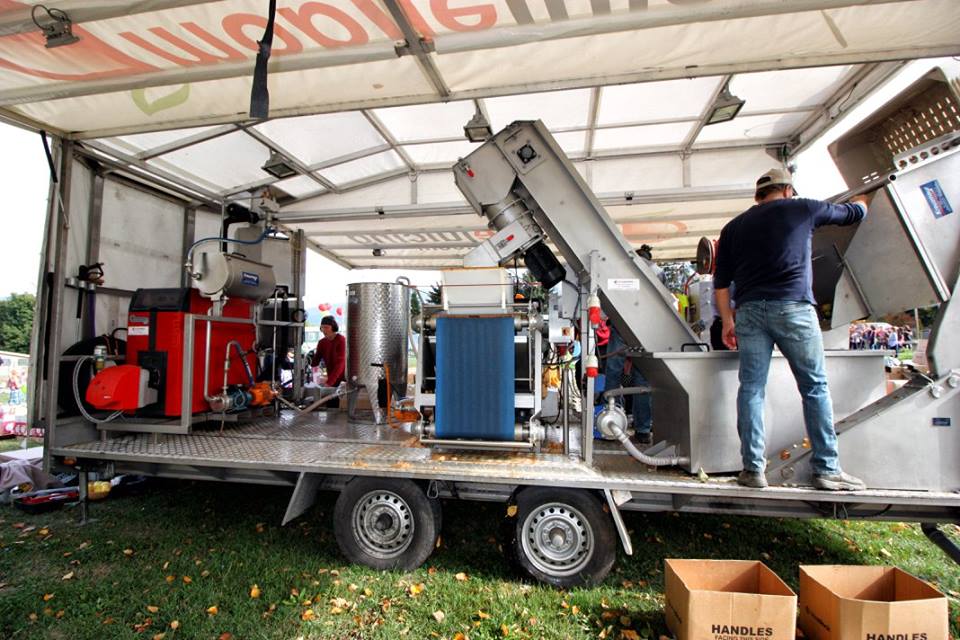 The pressing fees pay for staff to operate the press, and include  bag-in-a-box packaging. Beyond pressing fruit and vegetables into juice, the mobile press team ran trials using some of the press’s features. They packaged local wine, and also made pureed vegetable soups that were pasteurized and packaged. More trials are scheduled for 2018, working with local producers.

In the coming years, Fields Forward hopes to expand its co-operative marketing platform to support farmers with processing, storage, marketing and distribution of juice and other juice/pulp products. The group is investigating how to expand access to new markets and connect farmers to retailers and restaurants from the Creston Valley to Vancouver and Calgary.

The mobile press has exceeded all expectations in its first year of operation and the benefits to the community have been widespread:

The mobile press created six new seasonal positions (two full-time and four part-time) to operate the press and a number of indirect jobs are anticipated to be created as producers explore new revenue streams from fruit and vegetable juice.

The mobile press gives producers opportunities to create high-value fruit and vegetable juice from produce that is too small or imperfect to “make the cut.” Collective management and use of the press allows the service to be offered to local farms and producers at a low cost.

The co-marketing strategy will support a growing product line and access to additional revenue streams for local producers. By developing juice and other products, local producers can also generate income during non-harvest months, as well as adapt to any unexpected turn of events.

For example, the 2017 summer heat arrived early in the Creston Valley, meaning local cherries hit the market at the same time as other regions but were smaller and not as competitive. The mobile press gave some producers the flexibility to process all their cherries when they might have otherwise missed the entire market. 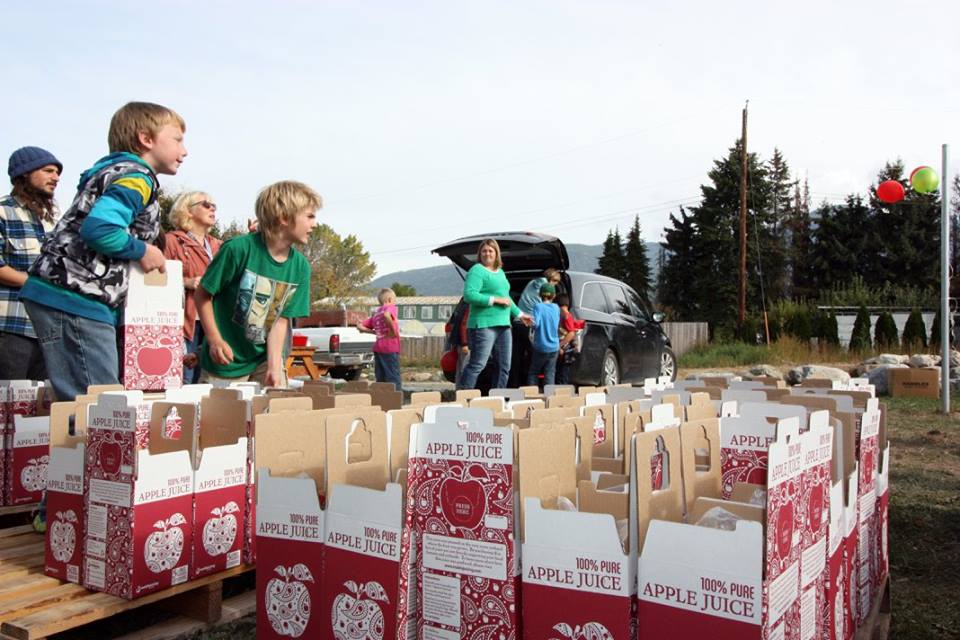 It also offers an alternative for producers who might have considered illegally dumping fruit to avoid landfill fees. Dumped produce becomes an attractant for bears, and some fruits, like cherries, can create very acidic, toxic soil. The waste mash from the pressing process is even used as animal feed by local farmers.

The project is also giving back to the community in other ways. Fields Forward partnered with three local food groups to distribute 15,000 pounds of culled apples and pressed 4,000 litres of apple juice, which has been donated back to the local schools and food banks.

Passionate community champions have been crucial to the success of the initiative. Fields Forward co-ordinator Jen Comer and Kootenay Employment Services economic action manager Heidi Germann say it took a whole community to build the overall vision and get the project up and running successfully.

They recommend finding your community champions early and helping them feel ownership of the project, as well as ensuring that your project team has clear representation from the population you’re trying to reach. The Fields Forward Impact Team has great success with holding monthly, early-morning breakfast potlucks to move the project forward – a schedule that works well for farmers with a busy day ahead.

The project has contributed to a strong sense of optimism in the Creston Valley. The region has a long agricultural history with residents who are connected to food, passionate, resourceful and forward-thinking. With the recent arrival of many young families to the Creston Valley, Fields Forward staff note that the energy is very upbeat. Many older farmers are eager to mentor young farmers as they look toward retirement.

It’s an exciting time and the community is growing together. Fields Forward is fully invested in harvesting that new energy and uniting the community around its connection with food to realize the full agricultural potential of the Creston Valley. 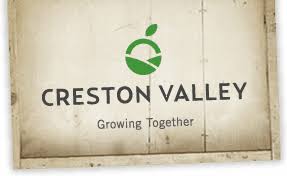 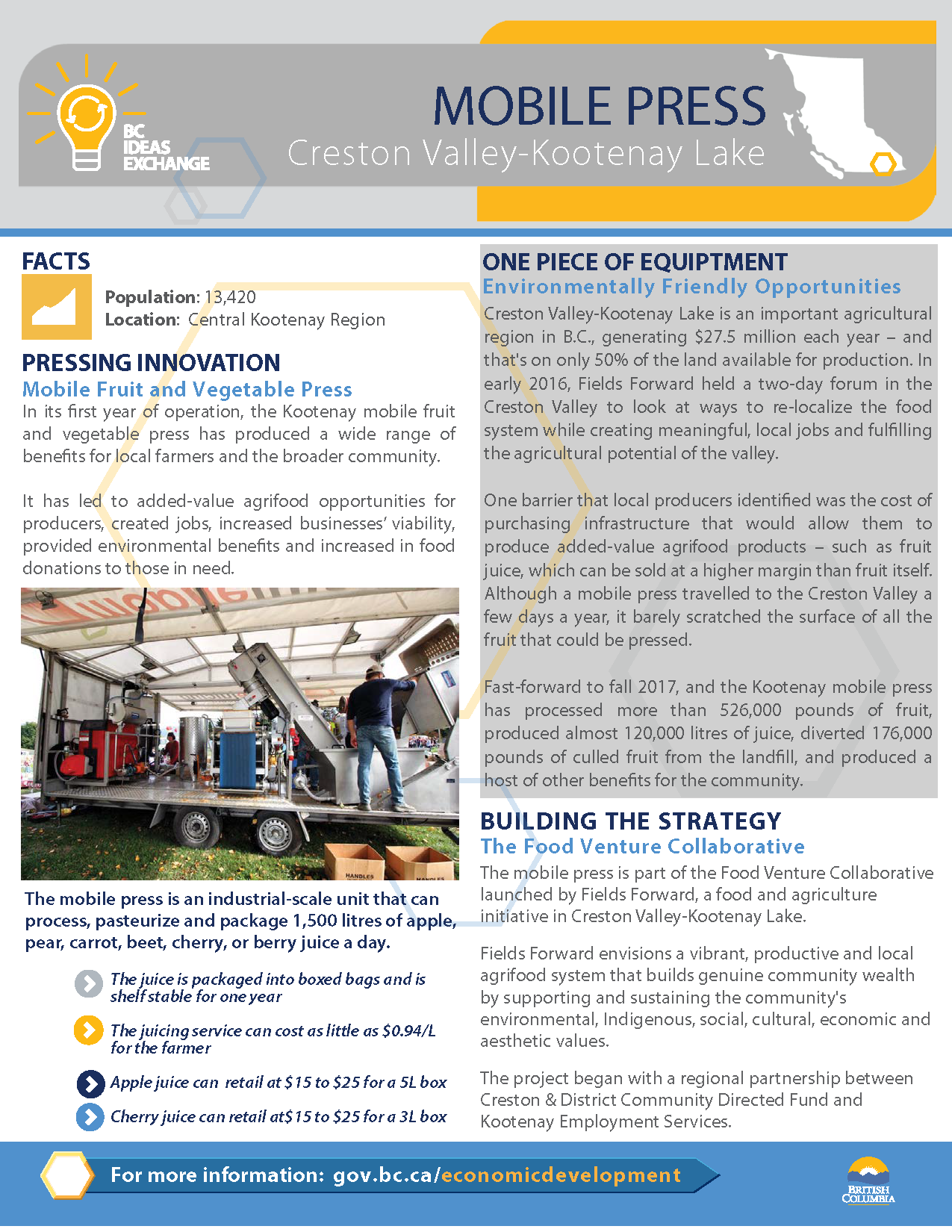