Natural hazards are Earth processes with the potential to harm people or property; natural disasters result when society is affected by a hazardous event.

Owing to global population pressures, more people live in areas vulnerable to natural disasters. As a consequence, the loss of life, private property, and infrastructure resulting from natural disasters is rising. Although commonly called “Acts of God”, natural disasters result from mass and energy transfers that have operated on Earth since it formed, 4.6 billion years ago. More importantly, natural disasters generally result from the inability of humans to anticipate, and plan for, inevitable hazardous events.

British Columbia is particularly vulnerable to natural hazards. For example, earthquakes, tsunami, and volcanoes are generated along the western flank of the province, as the tectonic plates that floor the Pacific Ocean drive beneath North America. Furthermore, British Columbia's mountainous terrain makes it prone to landslides, glacial outburst floods, snow avalanches, and seasonal floods, and its extensive coastlines are exposed to storm surges, tsunami that propagate across the Pacific Ocean from distant plate boundaries, and the effects of sea-level rise.

The objective of these maps are to show areas of Greater Victoria where the earthquake hazard is likely to be increased due to the presence of potentially unstable slopes, and soils susceptible to amplification of ground motion and/or liquefaction. This map shows areas of Greater Victoria in which the earthquake hazard is potentially increased due to the presence of soils susceptible to liquefaction.  Liquefaction is the transformation that occurs when earthquake shaking (or other disturbance) causes a saturated granular soil to lose its strength and behave like a liquid and can be one of the major causes of damage during an earthquake.  The susceptibility of a site to liquefaction depends on the depth to water table and the density, grain size and age of the underlying deposits.  This map was prepared by assigning a hazard rating to each geological map unit based on these criteria and quantitative analyses. Seismic slope hazard mapping is intended to show relative susceptibility to earthquake-induced slope failures.   The seismic slope hazard map is based on a compilation of existing subsurface data, previous slope stability assessments, bedrock geology and surficial geology maps, topographic data, and airphoto interpretation.  Stability analyses were conducted on twelve different slope models including typical or simplified slopes found throughout the Victoria area as well as specific, complex slope models where more detailed information was available.  The stability analyses determined both the static factor of safety and the yield acceleration (the intensity of seismic motions that would cause a slope failure). 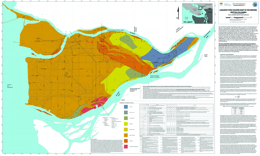 The City of Richmond, British Columbia, is located in one of the most seismically active regions in Canada (Rogers, 1998).  The effects of earthquakes are not only dependent upon the magnitude of the earthquake and the distance from the source, but can vary considerably due to local geological conditions.  These conditions can be mapped using existing geological and geotechnical data.  This map shows the variation in the earthquake-induced liquefaction hazard in the City of Richmond, BC.  The city is located entirely within the modern Fraser River delta, and the deltaic sediments on which the city is built are particularly susceptible to earthquake induced liquefaction (e.g. Byrne, 1978; Finn et al., 1989; Byrne and Anderson, 1991; Clague et al., 1992, 1997, 1998b; Watts et al., 1992).  This map has been prepared as part of an earthquake hazard mapping project in the city.  An accompanying map shows the Quaternary geology of the Richmond area (Geoscience Map 2010-2).

Preliminary Earthquake Hazard Map of the Chilliwack Area, Showing Areas of Relative Potential for Liquefaction and/or Amplification of Ground Motion 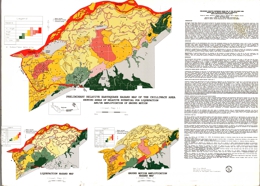 The earthquake hazard map of Chilliwack is the first map of its kind to be released by the British Columbia Geological Survey. Earthquake hazard maps show areas where the hazards due to earthquakes are increased due to local geological conditions, such as the presence of sandy soils susceptible to liquefaction, thick deposits of soft clay that can amplify earthquake ground motions, and unstable slopes that could fail. Damage due to earthquakes is commonly concentrated in such areas. The prime users of earthquake hazard maps are civic planners, engineers and building inspectors, emergency response planners, public officials responsible for prioritizing seismic upgrades, insurance companies, engineers and the public.

The Chilliwack map shows areas of relative potential for liquefaction, and amplification of ground motion, individually and combined. These maps were prepared by integrating new surface geological mapping with an extensive database of geotechnical testholes and water well logs to produce a subsurface geological model of the Quaternary deposits of the area. The liquefaction potential of each geological map unit is based on the sediment types present, their properties, and the expected frequency and strength of earthquakes. By this method, the hazard due to liquefaction is quantified and can be compared directly with the liquefaction hazard in other areas of the province. The amplification susceptibility of each geological map unit was determined by correlation of the sediment types present with the amplifications that have been observed in similar sediments during earthquakes. The combined hazard map was prepared by taking the higher of the two hazards for each map unit. Within the Fraser Lowland, the combined hazard rating ranges from low on alluvial fans and on the Cheam Slide, to high and very high along channels of the Fraser River and in areas where thick surficial silts and peats occur. The hazard rating is low to very low along the lower slopes of the Cascade Mountains and within bedrock inliers in the Fraser Lowland. 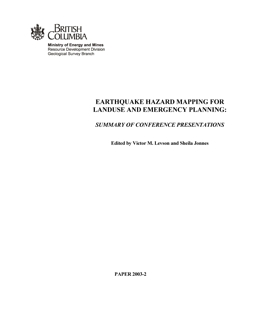