Ash is the inorganic residue remaining after coal combusts. It is composed of oxides of the mineral content in the coal. Coal ash chemistry can have a significant influence on coke strength after reaction (CSR), an important measure of coking coal quality.

Coals that were overlain by non-marine deposits (which includes most Canadian Rocky Mountain coals) generally have mineral assemblages that form ashes with low ratios of reactive oxides (i.e. Fe2 O3 , CaO, MgO, Na2 O and K2 O) to refractory oxides (i.e. SiO2 , Al2 O3 and TiO2 ), which favours good coke strength under blast furnace conditions. Coal ash chemistry is also used to predict slagging and fouling potential in the furnaces or kilns of all types of coals. This database compiles ash chemistry analyses of British Columbia Rocky Mountain bituminous coals from public sources into a standardized relational format to facilitate its distribution and use. 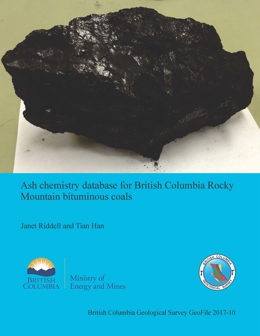 The dataset contains coal ash oxide and related analyses for 478 samples from the Gates, Gething, Minnes and Boulder Creek formations in the Peace River coalfields in the northeast part of the province, and from the Mist Mountain Formation (Fig. 6) in the Elk River and Crowsnest coalfields of southeastern British Columbia. These coals are mainly bituminous in rank; a few range to the sub-anthracite range. Not all samples in the dataset are coking coals.

Coal ash chemistry analyses have been used since the early 1980s as a first order indicator of coke strength after reaction (CSR), a measure of coking quality (Pearson, 1989). As a rule of thumb, a base-acid ratio (BAR) value of less than 0.2 is an indicator that the ash chemistry of the sample will not lower the CSR. They are also used to assess slagging and fouling potential (Stach, 1982; Song et al., 2010). Various workers have proposed methods to apply ash analyses to other predictions, such as the phase-mineral assemblages of mineral matter (Ryan and Price, 1993), and depositional environment, tectonic activity during deposition, and subsidence rate (Vassilev et al., 2010). Major oxide ash analysis is a simple and inexpensive test and is offered by most laboratories, including those that do not specialize in coal analysis. Predictions for CSR based on ash analyses are far less reliable than direct measurements but are a cost-effective way to identify variation within a deposit, formation, or seam, and to make more effective and strategic use of costlier analytical methods. Coal ash chemistry analysis results are not affected by oxidation, so surface samples are adequate. The sample does not have to go through the coking process, so it does not have to be large. Sampling can be done at any stage of exploration, including prospecting

The current version is downloadable here. CSR (coke strength after reaction with CO2) is a globally accepted measure of coking coal quality. But because obtaining direct CSR measurements is logistically complex, time-consuming, and expensive, numerous indices calculated from standard ash analyses have been developed to serve as predictors of CSR. Based on unpublished proprietary data from 50 samples representing the main coking coal-producing units in the Rocky Mountains of British Columbia (Gates, Gething, and Mist Mountain formations), correlations between measured CSR and the most commonly used predictive index (Base-Acid Ratio or BAR) are moderate to strong. Thus, they can be used to provide a reasonable first-order prediction for CSR. For all three formations, correlations improve slightly by modifying the predictive index by adding P2O5. Correlations improved further when the BAR index was modified to correct for calcium in apatite, which is less reactive that calcium in carbonate minerals. Ash chemistry-based predictions are not accurate enough for feasibility studies or product marketing, but they can provide a timely and inexpensive first indication of CSR. The relationships between CSR and other factors (rank, fluidity, and petrographic properties) have much weaker correlations to CSR than ash chemistry. CSR prediction methods that are based on rheological and petrographic properties fail to correlate well with measured CSR values for the British Columbia Rocky Mountain coking coals in this study and appear to have no predictive value.