This lesson covers basic background information on karst systems, processes and values, especially in relationship to the British Columbia forest environment. By working through this lesson you will be able to:

This lesson introduces you to basic information about karst terrain, where it exists in British Columbia, and why karst is important. Throughout this course you will find links to the Karst Management Handbook for British Columbia at the bottom of the side navigation on the left. If you want more specific information on any of the areas you are studying, just click on this link. You are encouraged to evaluate your learning by completing the self-check exercises. They don’t take long and will help you review the concepts that you have worked through.

Karst – a distinctive topography that develops as a result of the dissolving action of water on soluble bedrock (usually limestone, dolomite, marble, and, to a lesser extent, gypsum), which produces a landscape characterized by fluted and pitted rock surfaces, vertical shafts, sinkholes, sinking streams, springs, subsurface drainage systems and caves. 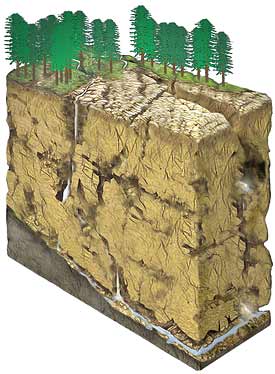 The unique features and three-dimensional nature of karst landscapes are the result of complex interplays between geology, climate, topography, hydrology and biological factors that happen over many thousands of years.

How is karst formed?

Karst is formed in carbonate bedrock through what is called the carbon dioxide (CO2) cascade. The main steps of the CO2 cascade are: 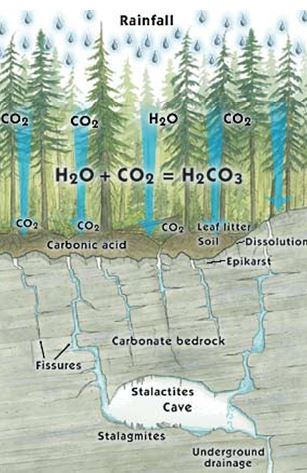 As rain falls through the atmosphere, it picks up CO2, which dissolves in the droplets.

When the rain hits the ground, it percolates through the soil and picks up more CO2 to form a weak solution of carbonic acid: H2O + CO2 = H2OCO3,

The infiltrating water naturally runs into any existing joints or fractures in the bedrock. With a continuous supply of CO2-enriched water, the carbonate rock eventually begins to dissolve, creating larger openings for the water to follow.

Where is karst found?

Is all carbonate rock in B.C. potential karst?

No, the level of karst development across the province is highly variable, because it depends on the type and purity of bedrock, physiographic location and biogeoclimatic settings. Glaciation has played a major role in the karst formation process in B.C. by exposing, eroding and burying earlier developed karst. The extensive glacial deposits commonly associated with the Interior likely mask significant areas of buried karst terrain.

B.C. karst on a global scale

Much of the karst in B.C. is comparable to karst terrain in other parts of the world (for example, Europe, Norway, Alaska, Tasmania, Chile, New Zealand). Timber harvesting concerns in B.C. have focused primarily on the karst on Vancouver Island, the Queen Charlotte Islands, and the mainland coast where the karst contributes to a rich growing environment for timber. These areas have very steep surface slopes and subsurface hydraulic gradients with very high levels of rainfall. These characteristics contribute to making these among the most dynamic karst terrains on earth, as they are evolving and changing more rapidly and abruptly than karst areas in more moderate settings. 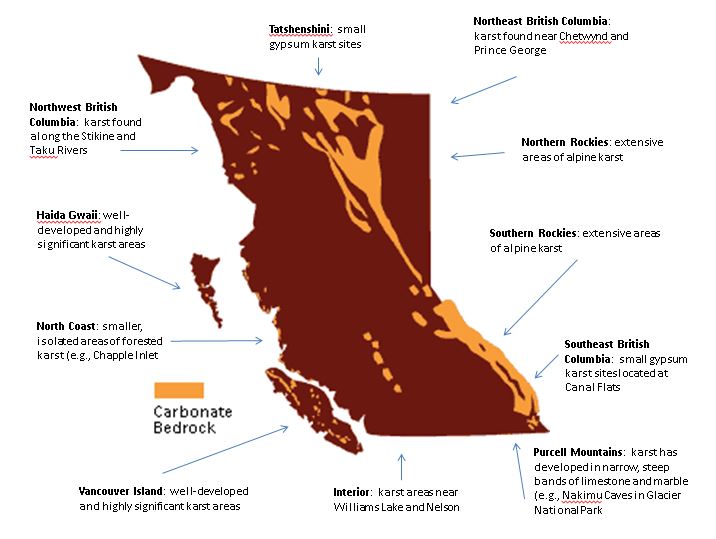 Answer either True or False to check your understanding.

Karst rock in the forest 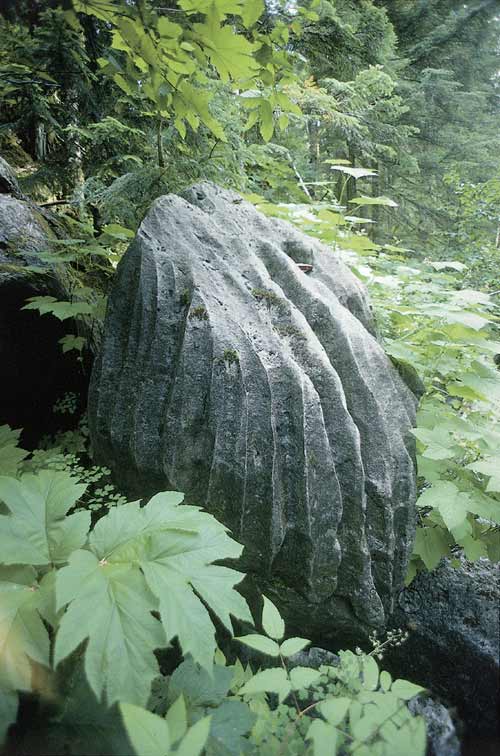 An interesting example of a karst formation.