Apple scab, caused by the fungus Venturia inaequalis is a common disease of apple in British Columbia.

It is an annual threat in the wetter interior fruit growing districts and is even more severe in the coastal areas of B.C. and the Fraser Valley. Apple scab has also caused significant losses in the drier areas of the Okanagan and Similkameen Valleys in years with higher than normal rainfall.

Leaf spots are circular or irregular in shape, and brown to olive green in colour with feathery margins. Severe infections, known as sheet scab, may cause the leaves to fall prematurely.

Fruit lesions are circular and brown to black in colour. The skin ruptures around the lesions revealing a dark velvety layer of spores. Older lesions become corky in appearance. The fruit is most susceptible when young. Early infections often result in large fruit lesions and severely cracked and malformed fruit.  Late season fruit infections may not become visible until the apples are in storage. They appear as either pin-point sized lesions, or jet black spots, and are sometimes called pin-point scab. 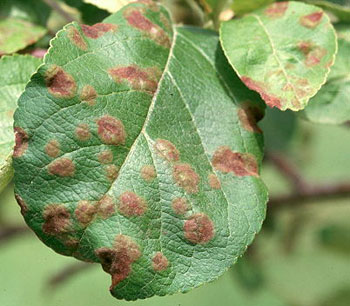 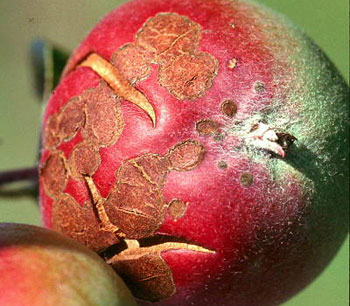 Primary Infection: Apple scab overwinters in infected leaves on the orchard floor. Spores (ascospores) are produced in these dead leaves just about the time that new growth appears in the spring (green tip stage). They are then discharged during rainy periods, and can be carried long distances in air currents. Ascospores land on new leaves, blossoms and fruit, and if the leaves or fruit are wet long enough for the spores to germinate, primary infection of fruit and foliage occurs. The primary scab season lasts until all the ascospores from last year's leaves have been released. This varies from year to year but typically peaks around blossom and ends by mid to late June.

Secondary Infection: Once primary infections have taken place, lesions develop on the leaves and fruit which produce secondary spores (conidia). Conidia are spread short distances mainly by splashing rain, and cause additional spread and build-up of the disease. The time needed for a new infection to begin producing a new crop of spores (incubation period) varies from 9 to 17 days, depending on the temperature.

Conidia require a similar or slightly longer period of foliage wetting as needed for a primary spring infection. However, unlike ascospores, they do not require an initial period of rainfall to initiate spore release. Early morning dew can be important in initiating wet periods that may lead to infection, particularly if followed by showers. Secondary scab lesions can remain active for about a month, producing large numbers of conidia.

Monitoring Infection Periods: The length of time required for infection depends upon the temperature during the time period when the leaves or fruit are wet. Table 1 illustrates the relationship between leaf wetness duration and average temperature, and can be used as a guideline to determine whether or not an infection period has occurred. The average temperature may be calculated by taking the average of the high and low temperatures during the wet period. When trees are dry less than 8 hours between showers, the periods the leaves are wet should be added together in calculating the infection period. As the length of wet periods increase at a given temperature, the severity of the scab infection also increases.

Fruit becomes more resistant to apple scab as it matures. Increasingly longer wet periods are necessary for fruit infection as the season progresses.  Table 2 shows the length of wet period required for secondary apple scab infection on the fruit at various intervals after full bloom. Fruit of several varieties was evaluated, and all reacted similarly.

Numerous apple cultivars with resistance to scab have been developed in breeding programs around the world, and there are many promising varieties under development.  Currently none of the mainstream varieties grown in the B.C. commercial market are highly resistant.  Many of the resistant varieties evaluated in the past were not suitable for long term storage or had other issues with quality or marketing.  Most currently available resistant varieties have a single gene that governs apple scab resistance. As a result, it is not difficult for the apple scab fungus to overcome the resistance (similar to fungicide resistance). Failure of resistant varieties has occurred in many areas of Europe and the United States, and has been detected in at least one Lower Mainland B.C. orchard.

Reducing primary inoculum: Several strategies will help to reduce the amount of overwintering scab. Primary inoculum is produced by infected leaf litter on the orchard floor. Any practices that reduce the amount of leaf litter will help to reduce the amount of inoculum. Note that these control methods do not replace the need for fungicides in commercial orchards. Reducing the initial inoculum will reduce the disease pressure in the orchard, making apple scab easier to control. It will not, however, eliminate the disease, and fungicidal protection will continue to be necessary. Low apple scab pressure is also valuable in helping to prevent or delay the development of fungicide resistance.

Protectant fungicides are applied to protect new growth during rainy periods or in anticipation of a rainy period. These chemicals provide a film of fungicide which prevents spores from germinating. Protectant sprays are usually applied on a calendar basis. Fungicides with eradicant properties also have protectant properties, and are generally more effective when used in protective programs.

Eradicant fungicides prevent or reduce further growth of infections that have already started, if the sprays are applied soon after the start of a rainy period. The advantage of eradicant sprays is that they are applied only when necessary; i.e. when infection periods occur. In most seasons this will reduce the number of sprays required.  A disadvantage is that repeated use of eradicant fungicides is likely to lead to resistance.  Also growers must have spray machinery available to cover the trees quickly after an infection period, and winds must be low enough to permit good coverage.

There are many fungicides registered for apple scab management in Canada. Please refer to the Tree Fruit Production Guide for current fungicide recommendations for B.C. orchards.  These can be found both in the Apple Spray Schedule and the Apple Scab section under Diseases. Always follow label instructions when using pesticides, including re-entry intervals and pre-harvest intervals.

First Spray: The risk of apple scab infection may begin as early as the green tip stage. If using a protectant program, and scab was a problem the previous year, apply the first spray at the green tip stage. If scab was well controlled last year, it may be safe to delay the first spray until the tight cluster stage. Sprays may also be delayed if there is no possibility of rain in the forecast.

If using an eradicant program, apply the first spray immediately after the first infection period. Begin monitoring infection periods at the green tip to tight cluster stage, depending on severity of scab the previous year.

Subsequent Sprays:  A protectant schedule is highly recommended during the critical pink to petal fall period, both for improved scab control and resistance management. During this time there is abundant scab inoculum, the weather is often rainy, and tree growth is rapid and highly susceptible. Protectant schedules are also recommended for orchards with high levels of overwintering apple scab inoculum.

To successfully use an eradicant schedule, the grower must be able to determine whether or not an infection period has occurred after every rainfall. Packinghouse field staff issue scab warnings to packinghouse members. B.C. growers may also monitor apple scab infection periods using the Decision Aid System (DAS). This will require setting up a free account, selecting the weather station nearest to your orchard, and adding the apple scab model. The model will indicate whether an infection period is developing or has occurred. DAS Spray recommendations are linked to the BC Tree Fruit Production Guide.  Alternatively, growers could install weather monitoring equipment in their own orchards, or hire orchard consultants who are monitoring infection periods.

In late June growers should carefully check leaves and fruit for the presence of scab lesions. If primary scab has been well controlled, such that only a few lesions can be found per tree, the interval between sprays may be lengthened for the remainder of the growing season. If scab lesions are not found, the grower could decide to eliminate scab fungicide applications entirely after the end of the primary season. However, this should be done with caution because it takes only a small number of lesions to produce a major epidemic later in the season if leaves and fruit are not protected, and if an extended period of wet weather occurs. If sprays are suspended, the orchard should be periodically monitored for the development of scab lesions for the rest of the season.

Pin-point or late season scab infections can develop only when there are visible leaf or fruit infections in the tree. For this reason, it is important that spray programs be continued throughout the summer if scab is present in the orchard. In the Okanagan, spray programs are often relaxed during dry summer weather. Be aware that this may result in fruit infection if wet weather occurs while the trees are unprotected and scab lesions are present in the orchard. Captan and ziram are used as late season protectants. Do not use eradicant fungicides as protectants for pin-point scab, and observe pre-harvest intervals for all late-season sprays.

Action Thresholds:  Techniques to assess the "potential ascospore dose", or PAD in an orchard are used in some areas. If the PAD is determined to be low enough, it is deemed safe to delay the beginning of the spray program until the pink fruit bud stage or until after 3 infection periods, whichever comes first. To determine PAD, it is necessary to do an assessment of scab levels on leaves in the fall. The use of PAD as a threshold has not been evaluated in B.C. For more information refer to Apple Scab: Improving Understanding for Better Management.

Have a question? Call or email us.