Sour rot is a cyclical problem in the Okanagan/Similkameen, reoccurring every couple of years and causing serious problems for vineyards.  However, in the B.C. interior, the 2004 growing season is still considered to have experienced the greatest crop damage due to sour rot.

Varieties affected include Pinot Blanc, Pinot Gris, Riesling, Pinot Noir and Chardonnay. It is likely that sour rot has always been present, but it may have been confused with botrytis bunch rot in the past. Sour rot affects both crop yield and wine quality. Infected fruit can give an unpleasant flavour to the finished wine and push volatile acid beyond acceptable levels. 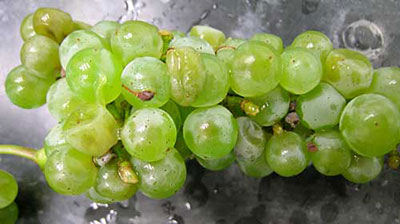 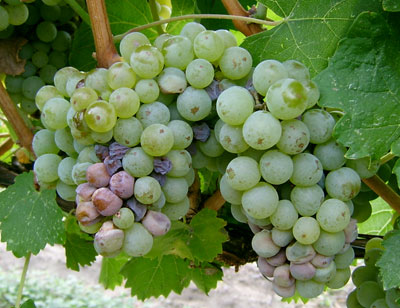 Sour rot is caused by a number of undesirable yeasts and bacteria, but can occasionally be seen in association with other fungal rot diseases including Botrytis, Penicillium and Rhizopus. Causal agents of the 2004 Okanagan outbreak of sour rot included several bacterial species (Gluconobacter cerinus, G. albidus and G. frateurii) and at least three yeast species (Pichia kluyveri, Candida spp. and Hanseniaspora uvarum).

Sour rot pathogens gain entry into grape berries through cracks and wounds caused by wasps, hail, birds, powdery mildew, botrytis, or by berry splitting caused by excessive vigour in tight clusters. Injured fruit attracts fruit flies (vinegar flies) which also effectively carry and spread the disease-causing organisms. During favourable conditions (warm moist weather, sugar accumulation in berries) the fruit fly will lay hundreds of eggs and start a new generation every ten to twelve days. Under the right conditions this can lead to explosive disease outbreaks. Fruit left on the ground from post-veraison bunch thinning can also be a contributing factor to build-up of fruit fly populations.

Cultivars with tight clusters and thin skins are generally more susceptible to sour rot. Very vigorous vines seem to be more prone to the disease due to tighter bunches with berries more likely to burst, and also due to a higher moisture environment.

Some local and Californian observations indicate that the use of botrytis fungicides during periods favourable to sour rot development may increase damage caused by sour rot. Some experts speculate that the fungicide may kill the micro-flora present on the berry surface. These organisms may have some protective effect against the yeasts and bacteria responsible for sour rot. However, research done in Italy in the early eighties found that powdery mildew and botrytis control, together with fruit fly control, significantly reduced the incidence of sour rot.