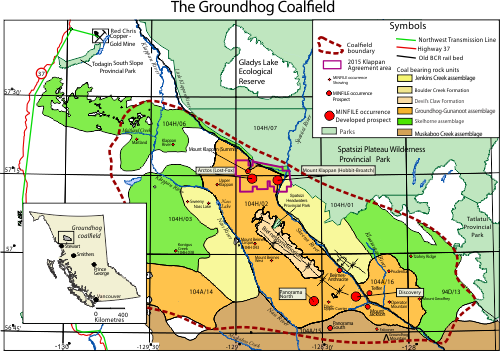 View IC2016-05 for more information on the Groundhog Coalfield

The Groundhog coalﬁeld is in the Skeena Ranges of northwestern British Columbia, a 30 by 80 km ovoid extending southeastwards from the headwaters of the Klappan and Little Klappan rivers to Groundhog Mountain. Coal occurs in several units of the Bowser Lake Group, which consists of Jurassic and early Cretaceous marine and non-marine strata deposited in Bowser Basin. There are up to 25 coal seams, which range in thickness up to 7 metres. The Groundhog coalfield contains Canada’s most significant deposits of anthracite, with estimated potential resources of 37 billion tonnes of coal (Ryan and Dawson1993). Groundhog coalfield coals have moderate to high purity and are low in sulphur.

Anthracite is relatively rare, making up about 1% of all coals globally. Of all coals, anthracite has the highest heat content per unit weight. The most significant market for anthracite is as PCI (pulverized coal injection) coal, which is used in making steel.

The area is extensively folded. The developed coal prospects lie in the northwest-trending Biernes synclinorium.

Coal exploration in the Groundhog coalfield began in the late 1800s. In the late 1970s and 1980s several oil companies extensively explored the Klappan, Discovery and Panorama areas.

In the early 2000s the Geological Survey of Canada and British Columbia Geological Survey mapped the Bowser basin and produced 1:50 000 scale geological maps for the entire Groundhog coalfield area (Evenchick. and Thorkelson, 2004).

Shell Canada explored the Groundhog's coalbed methane potential from 2004 until 2012, when the company relinquished its tenure as part of an agreement between Shell, the British Columbia Government, and the Tahltan First Nation.

In 2015, the Province of British Columbia and Fortune Minerals announced an agreement in which the Province would acquire tenure in the Mount Klappan area to facilitate work with the Tahltan Nation on a shared vision for the area.  The tenure holder, Fortune Minerals holds a 10 year option to repurchase the licenses at the original price. The agreement area is outlined in pink on the map.

A large coal reserve was established in 2017 over most of the western side of the coalfield. No coal exploration or mining is permitted in the reserve. See Mineral Titles Online for current coal reserve boundaries.