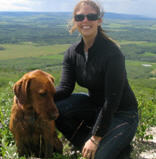 Currently, Rachelle works part-time as an academic detailer for the BC PAD service and part-time as a clinical hospital pharmacist at the Dawson Creek and District Hospital. She is also a term instructor for the University of Northern British Columbia. Previously, Rachelle was a community pharmacist and a pharmacy manager in Chetwynd. She still enjoys doing locum community pharmacy work whenever she can.

Rachelle has been an academic detailer since May 2009. She has completed the Basic and Advanced Academic Detailing training.