Six values have been selected for cumulative effects assessment in the Thompson-Okanagan Region:

Implementation of the cumulative effects framework in the Thompson-Okanagan Region builds on the demonstration project completed in the Merritt Timber Supply Area.

The Thompson-Okanagan Region is in the southern interior of British Columbia. Major cities include Kelowna, Kamloops, Vernon, and Merritt. The region has a human history dating back over 10,000 years and is rich with the Indigenous history and culture of the Secwépemc, Syilx, Nlaka’pamux, and St'át'imc Nations.

The region contains over half of the province’s biogeoclimatic zones, rare and unique grassland ecosystems, wet mountain ranges, and some of the driest places in Canada. Major lakes and rivers include Adam’s Lake, Shuswap Lake, Thompson River, Similkameen River, and Nicola River. The Adam’s River supports the second largest sockeye salmon run in British Columbia.

Tourism, agriculture, forestry, and mining are the predominant industries. Ranching is widespread, and orchards and vineyards are common in the south. The natural resource economy in the region is beginning to change, with an increase in renewable energy development. Human settlements continue to grow, resulting in significant urban interface pressures, such as fuel and watershed management.

The region has experienced several major disturbance events over the last decade, including wildfires, flooding, and forest pest infestations. Climate change is projected to increase the frequency of these events in the future. Further research and planning are needed to increase the region’s resilience to climate change. 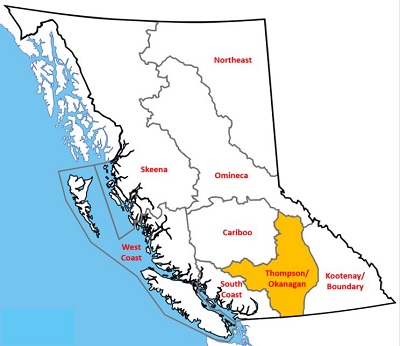 Learn about how cumulative effects information was used to inform a wind energy permitting application in Thompson-Okanagan Region.