The Environmental Emergency Response Officer (EERO) onsite did not see any evidence of diesel sheen in the river. The majority of the spilled fuel appears to be trapped in snow and soil in the top third of the slope next to the highway. Impacts to the Fraser River are expected to be minimal.

No further updates are anticipated at this time. 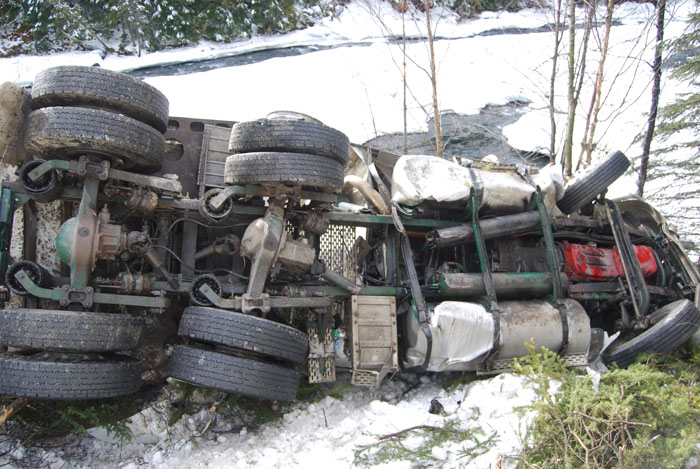 A single motor vehicle rollover occurred around 10:30 am this morning in Mt. Robson Provincial Park, 10 km east of Mt Robson Visitor Centre. According to initial reports, diesel fuel has leaked from the saddle tanks of the truck and an unknown amount may have entered the Fraser River. The truck was reported to be transporting cargo with no additional hazardous materials involved. The driver has been released from hospital with minor injuries.

RCMP and Commercial Vehicle Safety and Enforcement staff are onsite. B.C. Ministry of Environment has contacted the owner of the truck, Hills Bros Expressways, to ensure appropriate response actions are undertaken. A spill response contractor has been retained by the responsible party to clean up the spill. Hills Bros Expressways is sending a company representative to the incident. An Environmental Emergency Response Officer is also enroute to the incident site.

Follow on Twitter
Mixed petroleum material (hydrocarbon), has been discovered in a drainage ditch in the Village of Masset. Please se… https://t.co/MaA3TgaknM

The Port McNeill barge remains submerged by the ferry dock; however, no further major pollution releases are antici… https://t.co/8PHF7A8xDM

Unified response efforts continue for this incident. In-field operations are on-going, including the implementation… https://t.co/NLooHkBLAL