The BC Geological Survey released the first in a new series of Mineral Potential Maps for British Columbia in 1992. These maps evaluate the mineral potential of an area based on 1:50,000-scale geological mapping, integrated geochemical and geophysical data, and economic geology models. British Columbia is in the process of developing a comprehensive provincial land use plan that will be a major contributor towards the goal of a sustainable environment and economy. The Protected Areas Strategy (PAS) is a key initiative within this plan, as it will raise the amount of land in B.C. protected for conservation, recreation or heritage values to 12 percent from the present approximate 7 percent. A long document (some 330 pages long, and submitted as Bulletin 111) details the methodology used in performing a comprehensive mineral potential assessment of 948,596 square kilometres (total area of BC). It discusses the results and the reliability of the assessments.  The province is divided into "homogeneous" tracts and the mineral potential of each tract is assessed with respect to each of the Mineral Deposit types applicable.  Any past production is reported and an educated guess of how much more might be waiting to be found is reported in the form of probability statements.  Composite maps are presented suggesting how prospective an area is considered to be.  Of use to geologists, land planners, and ecological reserve managers alike.  (An enormous amount of data are found in this 22 MB PDF file). 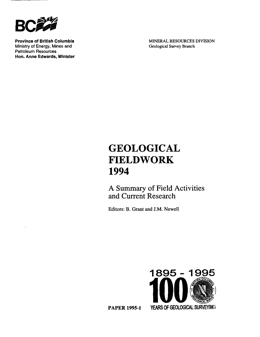 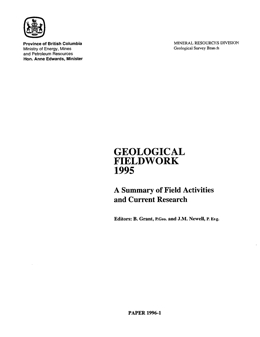 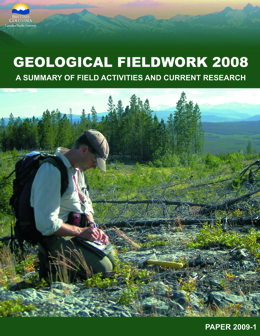 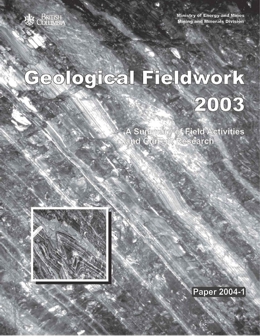 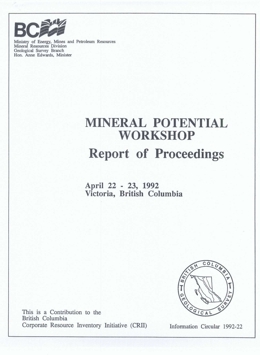 The British Columbia Geological Survey Branch's workshop on mineral potential map methodology was held in Victoria on April 22 and 23, 1992. It brought together both experts on the processes and potential clients for the products. The objective was to define a methodology which would meet the goals of the BC MEMPR's mineral potential initiative.

Participants from across Canada and the western United States of America were present. One day of formal presentations was followed by a day on which the delegates were divided into 4 working groups to address specific areas of concern.

This summary is a compilation of the recommendations from the workshop. A full description of the methodology to be employed on the BC Mineral Potential Initiative will be addressed in a later document. The enthusiastic sharing of expertise and expectations by workshop participants has been critical in the formation of a project strategy.