Stand level biodiversity can be effectively managed in commercially thinned, even-aged stands by typing out areas as wildlife tree patches prior to harvesting. Blocks should be assessed for candidate areas for WTPs using some of the same criteria recommended previously for WTP selection (mix of live and dead trees of varying size, decay class and condition, species mix, and location).

In general, because of the even-aged structural character found in commercially thinned stands, current within-stand biodiversity attributes may be limited. Therefore, location (delineation) of WTPs in relative proximity to special habitat features such as riparian areas; upland hardwood habitats; gullies and rock outcrops; marshy or other wet areas; and avalanche tracks will optimize the ecological value of the patch. This will retain the variety associated with edge conditions.

What else can you add to this information?

In a managed stand, the biodiversity considerations specified in a silviculture prescription should focus on maintenance of structural diversity (usually buffer strips and reserves) brought forward from the spaced stand and/or the previous harvest treatment (see Figure 14, below).

Stand structural diversity in unmanaged stands may require more creative solutions, and consultations with WLAP staff, to develop appropriate diversity. Structural diversity can be enhanced through various management practices (e.g., leaving a portion of the block unthinned). Riparian zones and buffers may partially achieve such an objective. Wet areas within blocks may be left unthinned primarily in consideration of trafficabilty. In addition, thinning areas of the block to less than target density can create openings. Planning for root rot treatments and salvage can create some openings. If there are reforestation objectives for the openings, normal silviculture prescription requirements apply. These areas can be valuable additions to a block's structural diversity.

Stand manipulations can include:

Commercial thinning may be designed to delay crown closure to meet range, wildlife habitat, biodiversity or other objectives. Future retention areas should be identified for managed and unmanaged areas (see Figure 15, below). Such areas will be maintained beyond the final harvest of the current rotation. The presence of these retention areas may influence the choice of an appropriate harvesting method.

Consider the following points for structural diversity and commercial thinning:

This technique may not work where Armillaria ostoyae is prevalent. If openings are desired in a stand where root disease is prevalent, no action need be taken.

What other stand manipulations can you add?

Favourable conditions for wildlife can be promoted by:

Next: Page 3, Managing for Biodiversity in Commercial Thinning, Conclusion 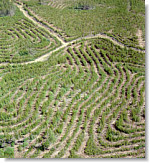 Stand level biodiversity can be effectively managed in commercially thinned, even-aged stands by typing out areas as wildlife tree patches prior to harvesting.