The most common treatment used to eradicate Lymantria moths (formerly referred to as gypsy moth) in B.C. is to spray with the biological insecticide Btk.

Btk is a bacterium harmful only to caterpillars. It must be applied by spraying.

The most efficient way to eradicate and suppress widespread Lymantria moth populations is to apply Btk from the air. This method has several important advantages over others.

Low Risk: Btk is harmless to humans and other non-target organisms (other than some species of caterpillar). It can be applied over populated areas and water bodies with very little risk.

Effective: After several decades of use, aerial sprays have been proved to be highly effective for controlling the Lymantria moth .

Fast: Large areas can be treated in just a few hours. Most droplets will have reached the ground within 10 minutes of application.

Thorough: Aerial spraying can treat remote or difficult-to-access areas, providing even coverage throughout the target area. Also, and most important, the droplets can penetrate the crowns of even the tallest trees.

Cost effective: Aerial application has the lowest cost-per-hectare of any effective treatment.

Drawback: Aerial spraying has one technical disadvantage — weather limitations. Rain and wind are the most important limitations to aerial application of Btk. Spraying can be done in moderate winds but low-to-no-wind is preferred. A period of two hours without precipitation after spraying is required to allow Btk to stick properly to foliage.

Date: Aerial spraying is usually carried out between April 1 and June 30. Exact dates depend both on Lymantria moth development and the weather.

Number of applications: There are usually three applications of Btk, ideally spaced 10 days apart. The actual time between sprays will depend on insect development and weather.

Safety: Highly trained spray specialists use a multi-engine aircraft, with all activities monitored by the project team. All necessary safety precautions are taken to ensure minimal risk to the public and the applicators.

Impact on the public: Aircraft flying as low as 150 feet above ground level apply the Btk. The public likely will hear aircraft noise during the early morning.

Btk can be sprayed also from the ground. Hydraulic sprayers are the most efficient of the available ground-level methods for applying Btk.

A hydraulic sprayer distributes the insecticide in a stream of liquid onto the foliage of trees and shrubs, usually until run-off is visible. Hydraulic sprayers have limited reach but can be quite effective at delivering Btk into the crowns of trees. Ground spraying is a viable treatment option for eradication of Lymantria moth when populations are small and isolated in known areas. In addition, ground spraying can specifically target potential host vegetation without treating other objects like houses, fences and non-host trees and shrubs.

Under the recently enacted Integrated Pest Management Act, ground spraying of Btk formulations does not require a Pesticide Use Permit.

Ground spraying is less effective when tree crowns are very high or dense. Other disadvantages of ground spraying: 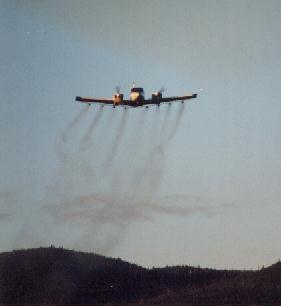 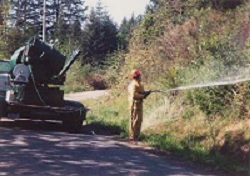