The gypsy moth's life-cycle stages are best managed in specific ways. You may come across eggs, caterpillars, cocoons or adult insects and want to identify whether they are gypsy moths by using the following information. 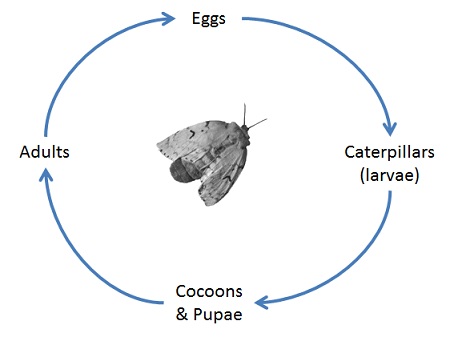 Eggs are laid in, on or inside trees — or on any solid object found under a tree such as lawn furniture, toys, vehicles or piles of wood or lumber. Egg masses can be transported over long distances when the materials the eggs were laid on are moved. Infestations can then spread slowly, when spring breezes blow young larvae across a few kilometers at a time.

The adult female gypsy moth lays eggs in masses in August and September. She covers the eggs with buff-coloured hairs, making the egg masses look like small pieces of cloth. The eggs hatch in the spring.

Look for the buff-coloured, spongy egg masses on the sheltered portions and crevices of items that are under or near trees. This includes all:

Eggs can be moved easily from one place to another. Examine your belongings before moving them to ensure no gypsy moth eggs are present.

Tiny larvae, or caterpillars, hatch from eggs between early and mid April. The caterpillars are responsible for the damage to trees and plants during a gypsy moth infestation.

There are more than 300 known hosts of the North American strain of the European gypsy moth.

The newly hatched, small, hairy caterpillars move up host plants to eat the newly emerged leaves. At this stage some can be blown by wind to new locations. Their light bodies can travel several kilometers when the wind catches the small threads of silk they make using glands in their heads. This spring "ballooning" is one of the key ways that a gypsy moth infestation can spread to new areas.

Gypsy moth caterpillars grow and change over a couple of months. They reveal a new look each time they shed their skin. By early July, they are fully grown and ready to pupate (transform to an adult within a cocoon).

While younger larvae feed mostly at night, older larvae feed day and night. A single caterpillar can eat up to 1,000 square centimetres of foliage in its lifetime, the equivalent of 15 oak leaves.

Mature caterpillars are about six to seven centimetres long, darkly coloured, and quite hairy. Each has a double row of tubercles (bumps) along its back. They usually have five pairs of blue and six pairs of red tubercles, but sometimes all tubercles are either black or blue.

Feeding is usually completed by late June or early July. Most larvae then move to sheltered locations such as bark crevices. There, within cocoons, they transform into adult moths — a process called pupating. Pupating takes about 10 days for a female and 13 days for a male. All caterpillars in a population pupate within a month, usually during July.

The pupae are dark reddish-brown, usually with a few yellowish hairs. Female pupae are much larger than male.

Moths — the adult stage in the gypsy moth life cycle — start emerging from their cocoons in late July. This emergence can continue into late August in south-coastal B.C.

Adult gypsy moths do not eat. They live only about a week — long enough to mate and for the females to lay their eggs.

Females attract mates using chemicals called pheromones. After mating, the female lays her eggs before she dies. Her eggs will hatch the following spring. Egg-laying is usually complete by early September.

What Can You Do?

If you find any of the gypsy moth life stages, please contact the Canadian Food Inspection Agency (CFIA) as soon as possible. An inspector will investigate.

Not sure if you have found a gypsy moth?