This guideline provides recommendations for the use of non-vitamin K antagonist oral anticoagulants (NOAC)* in the prevention of stroke and systemic embolism in adults aged ≥19 years with non-valvular atrial fibrillation. Description and comparison of the characteristics and indications of NOACs will be provided. The use of NOACs in orthopedic prophylaxis and venous thromboembolism treatment is not included.

Non-valvular atrial fibrillation (AF) is defined as AF that occurs in absence of rheumatic mitral stenosis, a mechanical or bioprosthetic heart valve, or mitral valve repair.

NOACs share similar clinical characteristics but they each have unique pharmacological profiles that determine their safety and suitability in individual patients.3,4 Table 1 summarizes the important properties of NOACs relevant to clinicians. The major practical advantage of the NOACs over warfarin is their predictable pharmacokinetic and pharmacodynamic properties (relative to warfarin), which allow these drugs to be given once or twice daily by mouth in fixed doses. They also have a rapid onset of action, reaching peak plasma concentrations in less than 3 – 4 hours. They have variable half-lives that are highly dependent on renal and/or liver function. 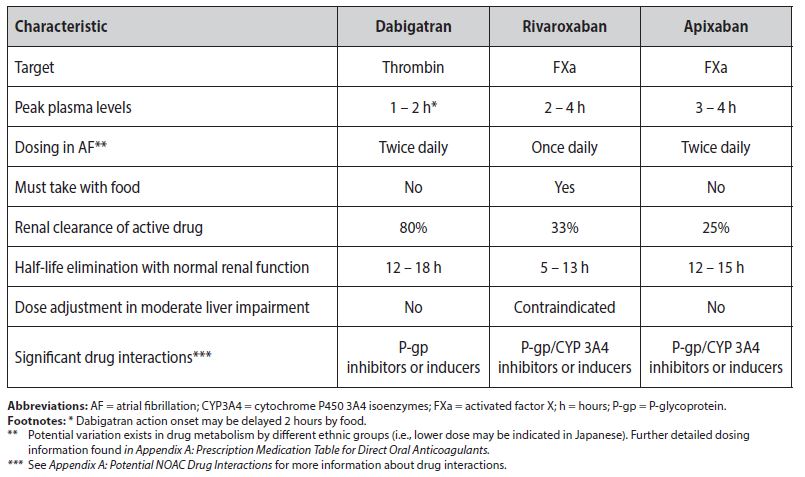 The NOACs have fewer identified drug interactions compared to warfarin. However, they should either not be given, or should be co-administered with caution, to patients who are also receiving potent inhibitors or inducers of P-glycoprotein (P-gp) transport or cytochrome P450 3A4 isoenzymes (CYP3A4) pathways. Appendix A: Potential NOAC Drug Interactions provides a list of some commonly used drugs that interact with NOACs. This is not an exhaustive list and clinically significant drug interactions may be identified with increasing use of these medications.

Evidence for NOAC in Stroke Prevention in Non-Valvular Atrial Fibrillation

The three NOACs currently available in Canada are dabigatran, rivaroxaban and apixaban.

All three have been compared with warfarin in large, multinational, randomized controlled trials in preventing stroke and systemic embolism in patients with non-valvular AF.5-8 These drugs have been shown to be “no worse” or better than warfarin in preventing stroke or systemic embolism. Consequently, warfarin is still a reasonable alternative in most patients. All three NOACs have been shown to be associated with a lower risk of intracranial bleed.  The details of the trial outcomes can be found in Appendix B: Outcomes from Anticoagulant Active-Comparison Randomized Controlled Trials. It is important to note that the absolute differences of these outcome events between a NOAC and warfarin are approximately 0.5% or less. Cost-effectiveness analyses are very sensitive to the specific patient population (e.g., age, warfarin control) and drug cost, and are not helpful in making therapeutic decisions in an individual patient.

Table 2. NOACs versus warfarin for prevention of stroke or systemic embolism in non-valvular atrial fibrillation

How to Choose the Most Appropriate NOAC for Your Patient

There is no single “best” or “first choice” NOAC as the different NOACs have not been compared in a head-to-head fashion and the clinical trials to date were not designed to help select the most appropriate anticoagulant in individual patients. The drug selection process requires a systematic approach that incorporates: understanding the clinical trials data, consideration of the risk factors for bleeding, checking the patients’ recent renal and liver function, reviewing potential drug interactions, talking to the patient about his/her values, life style (e.g., accessibility to International Normalized Ratio (INR) monitoring), drug cost, and educating them about the limitations and advantages of the options. See Appendix C: Prescription Medication Table for Non-Vitamin K Antagonist Oral Anticoagulants (NOAC) with Non-Valvular Atrial Fibrillation for drug costs and doses.

There are selected patient populations in whom NOACs should NOT be used because of a specific safety concern or lack of evidence. NOACs should not be used and warfarin is recommended in patients with any of the following features:

In patients weighing less than 60 kg or greater than 100 kg, calculate the creatinine clearance (CrCl) and do not depend on the estimated glomerular filtration rate (eGFR) provided by laboratory reports (because weight has not be adjusted). CrCl can be calculated using the (link to calculator: Cockcroft-Gault formula) according to the patient’s age, weight, and serum creatinine:

Thrombin time (TT) is a highly sensitive assay to the presence of a direct thrombin inhibitor.13 It will be elevated in patients treated with dabigatran. If the TT is normal, it excludes the presence of any anticoagulant effect from dabigatran. Although it might be helpful in patients presenting with bleeding to determine if dabigatran is present, it should not be used routinely to measure or monitor the anticoagulant effect of dabigatran.

Specific assays, including the dilute thrombin time test (e.g., Hemoclot® assay)14,15 and anti-FXa assay,16 that measure the indirect anticoagulant activities of NOACs have not been evaluated for clinical use and those commercially available have not been standardized or validated.

Table 3 compares some of the advantages and disadvantages of warfarin compared to the NOACs. Both the clinician and patient should carefully consider these reasons in addition to the evidence from clinical trials. Patients must have their renal function checked prior to starting a NOAC.

Table 3. Advantages and disadvantages of warfarin versus NOACs

Patients who are already anticoagulated with warfarin at a stable dose and maintain optimal time in therapeutic range (TTR) are unlikely to receive a morbidity or mortality benefit from switching to a NOAC.18-20

TTR is a measure of the proportion of total treatment time that the INR is within the therapeutic range (INR 2.0 – 3.0). Most experts agree that the optimal or acceptable TTR is 65% or higher.21-23 In those patients who have had difficulty maintaining the TTR above 65% or have demonstrated labile INRs, switching to NOAC should be considered provided that the patient does not have contraindications to using a NOAC, such as drug interaction or severe renal impairment.

Switching Between Warfarin and NOAC

If switching is required, there are no standard strategies for safe switching. In clinical trials, this transition period is associated with an increased risk of stroke and systemic embolism.24 Figure 1 provides a reasonable approach to switching from warfarin to a NOAC.

Figure 1. Switching from warfarin to a NOAC

Switching from a NOAC to warfarin is more complicated because NOACs can increase the baseline INR. If a patient is on a NOAC:

Patients who choose to use NOAC should be reassessed for the first time within 1 month after starting a NOAC to review potential side effects, such as gastrointestinal (GI) upset or excessive bruising or bleeding. The frequency of follow-up thereafter should be individualized based on bleeding risk. Medication compliance and education regarding signs and symptoms of stroke and bleeding should be reviewed with the patient periodically to maximize adherence. Because the half-lives of NOACs are relatively short, missing 1 - 2 doses of the medication can lead to subtherapeutic coverage. Patients should be encouraged to use a pill tracking system (e.g., dosette, blister pack) to maximize compliance. Note: dabigatran must be stored in its original bottle or blister package to protect from moisture. Once the bottle is opened, capsules must be used within 60 days. Mishandling and storage can cause the drug to become ineffective.25

Renal function testing should be done before starting NOAC and at least once every 6 - 12 months, or more frequently if clinically indicated (e.g., elderly patient with borderline renal function).

Although clinical trials evidence is not available, there are consensus recommendations and manufacturer suggestions on when to temporarily discontinue NOAC in preparation for surgery or other invasive procedures.26-29 It is important to note that clinical trials evidence for management of warfarin in the perioperative setting are also sparse and standard of practice is largely based on clinical experience.30-32

The timing of interruption and resumption of NOAC in the perioperative period aims to balance the competing risks of bleeding and thrombosis. Without reliable laboratory testing to measure the anticoagulant effect, the timing of the last dose of NOAC depends on drug half-life, renal function and the bleeding risk associated with the procedure.  This must be balanced against the risk of stroke, which increases as the interruption period prolongs.

Table 4 provides recommendations on how long to withhold a NOAC based on the drug’s pharmacokinetic properties, a patient’s renal function, and the estimated risk of bleeding associated with the procedure. The risk of stroke based on the patient’s CHADS2 score helps to determine if bridging is indicated in those on warfarin (see BCGuidelines.ca - Warfarin Therapy - Management During Invasive Procedures and Surgery), but bridging practice has not been advocated by experts in patients stopping NOACs for procedures and surgery.

See Appendix D: Relative Risk of Bleeding Associated with Common Invasive Procedures for listing of procedures and their associated risk of bleeding.20,33

These recommendations should be modified individually, if indicated, and should be discussed with the surgeon or interventionalist, and anesthesiologist involved. Patients having neuraxial blockade (spinal anesthesia or epidural analgesia) are considered to have a very high risk of bleeding because of the rare but devastating complication of spinal hematoma. Similar to warfarin, withholding NOACs for minor procedures (e.g., skin biopsy, cataracts or dental procedures) is not necessary.

After the procedure or surgery, NOAC should not be restarted within the first 24 – 48 hours because therapeutic levels are reached within 3 – 4 hours of the first dose. The timing of the first dose should be discussed with the surgeon or interventionalist. In patients who require venous thromboembolism (VTE) prophylaxis, low molecular weight heparin can be given prior to restarting NOAC. No overlapping is necessary in switching from low molecular weight heparin to NOAC. In patients undergoing major joint replacement where prophylactic doses of NOAC is used post-operatively, the therapeutic dose of NOAC for atrial fibrillation can be introduced when the surgeon is satisfied with hemostasis.

Specific antidotes are currently not available for NOACs in Canada.34,35 Idarucizumab has been approved in the United States for reversal of dabigatran. Andexanet, a reversal agent for FXa inhibitors (e.g., rivaroxaban, apixaban, low molecular weight heparin), is in clinical trial testing. Usual supportive care with fluid support, red cell transfusion, etc. should be done and the source of bleeding must be identified and treated if possible. Frozen plasma has no role in reversing the anticoagulant effects of NOACs. The use of prothrombin complex concentrate and recombinant activated factor VII have not been adequately evaluated and should not be routinely given to patients presenting with bleeding while on NOACs. Their use in life-threatening cases should be discussed with an expert on the use of blood products and anticoagulants (e.g., hematologist, transfusion medicine specialists). The risk of thrombosis is a serious complication with these blood products, especially in patients who are already at risk for stroke. Dialysis is useful in removing ~60% of dabigatran and can be considered in cases of overdose or severe renal failure. Dialysis is not effective for removing rivaroxaban or apixaban because they are tightly protein bound.

The following documents accompany this guideline:

This guideline is based on scientific evidence current as of the Effective Date.

This guideline was developed by the Guidelines and Protocols Advisory Committee, approved by the British Columbia Medical Association, and adopted by the Medical Services Commission.

The Clinical Practice Guidelines (the “Guidelines”) have been developed by the Guidelines and Protocols Advisory Committee on behalf of the Medical Services Commission. The Guidelines are intended to give an understanding of a clinical problem, and outline one or more preferred approaches to the investigation and management of the problem. The Guidelines are not intended as a substitute for the advice or professional judgment of a health care professional, nor are they intended to be the only approach to the management of clinical problem. We cannot respond to patients or patient advocates requesting advice on issues related to medical conditions. If you need medical advice, please contact a health care professional.

Keep current on BC Guidelines by signing up for our email notification service.

Questions, comments or suggestions? We would love to hear from you.

BC Guidelines is always looking for knowledgeable practitioners to chair and serve on our working groups.

Email BC Guidelines at hlth.guidelines@gov.bc.ca and ask for an application package today.