Southern mountain caribou designatable unit (DU9), formerly the mountain caribou ecotype, are a globally unique population though they are genetically indistinct. They are one of the world's southernmost caribou populations, found from central British Columbia down to northern Idaho and Washington states. These are also one of the only remaining caribou that live in rugged, mountainous terrain and feed on arboreal lichens in winter. These caribou are listed as threatened under the federal Species at Risk Act.

The southern mountain caribou population has drastically declined over the past 100 years, with a sharp decline from about 2500 animals in 1995 to about 1540 in 15 herds today. The decline of these herds is mainly due to high mortality linked to predation and disturbance in the short-term. In the long-term, southern mountain caribou are threatened by habitat fragmentation, alteration and loss of old growth forest.

For more about the ecological status of southern mountain caribou and probable reasons for their decline:

Results from the 2006 Mountain Caribou Population Survey, including population trends:

Recovery planning for mountain caribou began in 2005. A draft recovery strategy was developed for public consultation. An independent mountain caribou science team also created a number of reports and made recommendations to the Province of British Columbia on identifying habitat and necessary management actions to recover or maintain population.

Read the MCST’s reports and recommendations:

The cross-agency Mountain Caribou Recovery Implementation Plan (MCRIP) is endorsed by the Government of B.C. and based on results from the MCST and consultations with provincial officials.

Learn about the province's commitments to the recovery plan:

The following resources provide information about the efforts made by the Government of B.C. to preserve and manage the mountain caribou population.

Initiatives intended to increase the population of these herds include maternal penning to provide a predator-free area for mother and child pairs until both are stronger and are able to escape predation.

Issuance of any new commercial recreation tenures is suspended in some parcels of Crown land situated in the vicinity of:

This reserve will remain in effect while mountain caribou recovery implementation is undertaken. Learn more about the Section 16 Land Act Amendment (PDF).

Caribou near Dease Lake were captured and transported to the Purcell-South herd in the East Kootenay region to complete the first phase of a transplant project. A total of 19 caribou were transplanted.

Dease Lake to the Kootenays

Video of caribou being captured by net gunning, sedated, and flown in the back of helicopters to Dease Lake for ground transportation to the East Kootenay. 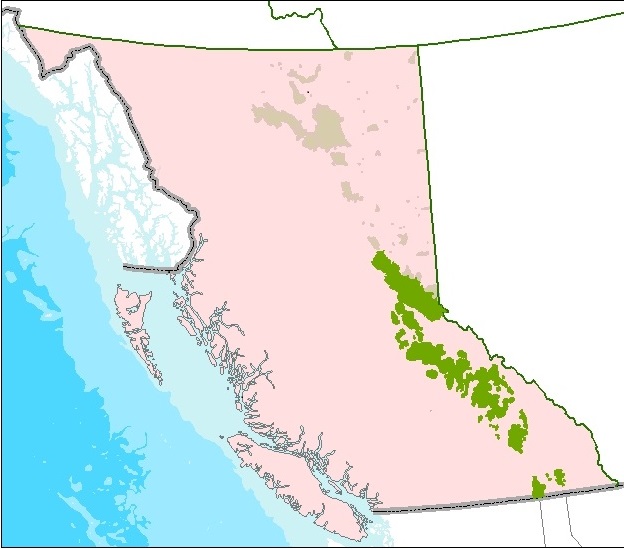 View a larger map of the Southern Mountain Caribou habitat