Biocontrol is not a substitute for good land management, and must be part of an overall land management plan. Invasive plants will persist and re-establish, or new invasive plant species will invade, if soil and plant disturbances are excessive and the surrounding vegetation is not vigorous enough to take advantage of the invasive plant's reduced competition.

Of critical importance for this list of biocontrol agents is the understanding that the research performed to request regulatory permission to import an agent will always include testing of closely related native plants and those of economic concern.

The research process for finding a biological control agent for B.C. is described:

These plants are undergoing screening as potential new biocontrol agents:

Biocontrol is a long-term, self-sustaining treatment method for managing invasive plants, and can be divided into two approaches.

This method uses natural predators of the invasive plant to establish a long-term balance between the biocontrol organism (agent) and the plant. For example, St. John's wort is considered under successful biocontrol— its population is cycling in a classical biological control pattern.

Under classical biological control an invasive plant will never be eradicated since the biocontrol agent's population will decline after the invasive plant population has been reduced. As one's population increases or decreases, the other's will follow due to the increased or diminished supply of food, or conversely, feeding pressure.

Classical biocontrol agents may kill the invasive plants directly or indirectly by decreasing reproductive and competitive abilities or plant vigour, which in turn encourages the re-establishment of native vegetation.

Inundative biocontrol typically uses pathogens, such as rusts and nematodes, that are applied to the target weed at high rates in a manner similar to herbicide application. The intent is to use large quantities of the agent to attack the target, thereby wiping it out all at once. Like other application methods, it does not deal with the residual seed bank in the soil or prevent the invasive plant from re-establishing. 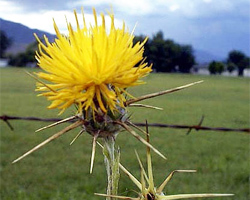 Invasive Species on the Land Base