What is the Trans Mountain Expansion Project?

The Trans Mountain Expansion Project (Project) is an expansion of the existing Trans Mountain pipeline system which transports oil and other products between Edmonton, Alberta and Burnaby, B.C. It will include approximately 987 km of new pipeline, new and modified facilities, such as pump stations and tanks, and the reactivation of 193 km of existing pipeline. The expansion approximately triples the capacity of the Trans Mountain pipeline system and will increase the capacity of the Westridge Marine Terminal on Burrard Inlet from 5 Aframax tankers per month, to a maximum of 34.

Why is the Province reconsidering aspects of the Trans Mountain Expansion Project?

In 2018 the Federal Court of Appeal determined that the NEB excluded Project-related marine shipping from aspects of its review and overturned federal approval of the Project.  As a result, the NEB undertook a 155-day ‘reconsideration process’ and released a ‘Reconsideration Report’ that provided additional information. The federal government then used this 2019 Reconsideration Report to inform its decision to approve the Project again.

In September 2019, the BC Court of Appeal, in two cases (1, 2), decided that because the Ministers who issued the provincial EA Certificate relied on the NEB’s assessment, they should have the opportunity consider the changes in the NEB’s Reconsideration Report and determine if any changes to the EA Certificate conditions, or the addition of new ones, are necessary, within the limits of provincial jurisdiction.

In March 2020, the Ministers directed the EAO to undertake a reconsideration process and prepare a report to advise their decision.

More info can be found in a detailed history of how the Province arrived at the Trans Mountain Expansion Project Reconsideration.

What is the Province Reconsidering?

Consistent with the direction of the BC Court of Appeal, the scope of the reconsideration process is to:

This means that the EAO’s scope is the changes to the NEB’s Reconsideration Report, which focused on the effects of Project-related marine shipping. In addition, EA Certificate conditions can only be legally binding on the project proponent. Trans Mountain does not own, and has limited influence over, the tankers that would transport the products that would be delivered by the Project. Marine navigation and shipping are areas of federal jurisdiction, regulated by several federal agencies. This context means there are limitations on what Provincial Ministers are able to attach as conditions to the EA Certificate. However, the provincial and federal governments have shared jurisdiction over the environment and some of the socio-economic components that may be impacted by the Project, and the responsibility to protect and manage marine resources is a joint effort.

What is the Province proposing to change?

The EAO is presently proposing the following amended and new conditions to those already attached to the Trans Mountain Expansion Project’s EA Certificate:

More details on what work has happened in the province’s reconsideration process is available here.

What is the Province not able to change?

This provincial reconsideration process cannot revoke the provincial EA Certificate or provincial approval, or otherwise ‘cancel’ the Project. The BC Court of Appeal provided direction to consider the changes between the two NEB reports (focused on the effects of Project-related marine shipping), and the Province and the EAO are bound to that scope.

This process cannot consider anything outside that scope which includes things like:

How can I get involved?

Where can I find more information?

The links under each topic above lead to more relevant detailed information. You may also find the following helpful:

What are the next steps?

Following completion of the public comment period, the EAO will be revising the reconsideration report in consideration of all feedback received. The EAO will also be providing additional opportunity for comment and engagement to Squamish Nation, Tsleil-Waututh Nation, the City of Vancouver, Trans Mountain, and provincial and federal government agencies. As appropriate, the EAO will have further engagement with other Indigenous groups and parties.

The EAO expects to finalize the reconsideration report by early summer 2021 and provide it to Ministers to inform their decision on whether to add or amend any conditions to the TMX Environmental Assessment Certificate. 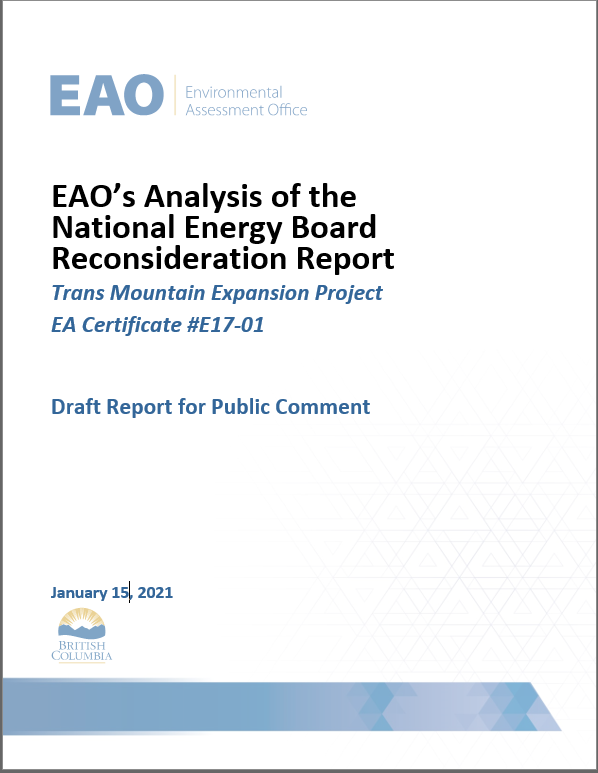 Proposed changes to marine shipping requirements for the Trans Mountain Expansion project are detailed in the EAO's Draft Analysis of the National Energy Board Reconsideration Report.