B.C. origin exports to the European Union have been trending down 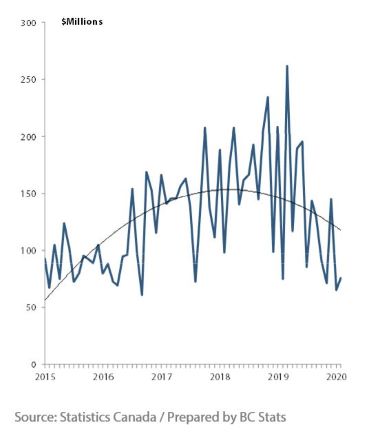 * Note that, starting with this release, the European Union is now being reported using the membership as of February 2020; i.e., excluding the United Kingdom. The data has been adjusted for the entire time series.

Exports of energy products also experienced a substantial decrease, falling 28.0%. There was a precipitous drop in shipments of coal (-41.5%), but exports of natural gas (-36.1%) and electricity (-38.8%) also fell, at least in value. The volumes of electricity and natural gas exported actually increased, so the declines were entirely due to lower prices.

There were also reductions in shipments of chemicals and chemical products (-17.0%) and fish and other seafood (‑2.2%); however, there were some commodities for which exports actually increased. Shipments of machinery and equipment climbed 2.4% year-to-date to February, while exports of fabricated metal products increased 4.7%. There was a 3.4% rise in shipments of agriculture and food products, while exports of plastics and articles of plastic jumped 20.1%.

The value of B.C.’s commodity exports fell 7.5% in February, due mainly to a 26.8% slump in shipments of energy products, as well as a 21.0% drop in exports of metal ores and non-metallic minerals. The largest increase in shipments was for forestry products and building and packaging materials, which climbed 6.1%.

The overall decline was entirely due to a 16.1% drop in exports to the rest of the world excluding the United States, as shipments to the U.S. edged up 0.3%. A 26.6% decline in exports of energy products to the U.S. was offset by growth in shipments to most other major commodity aggregations, including forestry products and building and packaging materials (+16.7%), and industrial machinery, equipment and parts (+15.6%).

The reduction in shipments to the rest of the world was largely driven by a 27.0% drop in energy product exports and a 21.9% decline in shipments of metal ores and non-metallic minerals.