B.C.'s exports to Japan are trending up 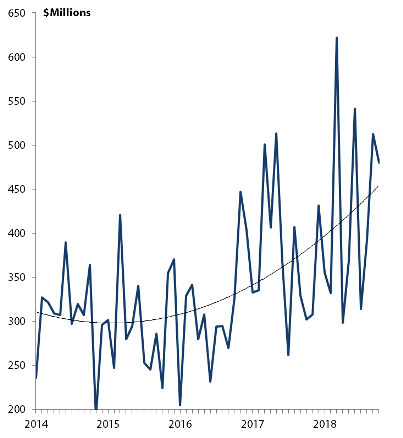 Source: Statistics Canada/Prepared by BC Stats

B.C.’s exports of energy products dipped 0.8% in the first ten months of 2018 compared to the January to October period in 2017. The value of natural gas shipments fell 16.6%, which was entirely due to a drop in prices as the volume of gas exported rose 7.5%. There was also a drop in the value of electricity exported (-11.0%), although higher prices prevented an even steeper decline as the quantity of electricity transmitted over the border fell 36.9%. On the positive side, exports of coal (+4.9%) and other energy products (+13.8%) increased in value.

B.C.’s international shipments of machinery and equipment recorded robust growth of 12.6%, led by a 71.5% surge in exports of motor vehicles and parts and a 45.3% jump in shipments of aircraft and parts.

Exports of agriculture and food products climbed 9.1%, while fish product exports increased 10.2%. There was also strong growth in shipments of fabricated metal products (+10.4%) and plastics and articles of plastic (+19.8%), and exports of chemicals and chemical products edged up 0.8%.

The value of B.C.’s commodity exports fell 2.4% in October, with significant declines in shipments of forestry products and building and packaging materials (-3.6%), energy products (-3.3%) and aircraft and other transportation equipment and parts (-42.0%) more than offset a substantial jump in exports of metal ores and non-metallic minerals (+17.2%).