The cost of new housing in B.C. went up by 0.1% between May and June. Prices in Vancouver rose 0.2% in the month, while prices in Kelowna and Victoria remained unchanged compared to the previous month.

Relative to the same month of 2017, the cost of new housing in B.C. continued to climb in June, rising by 3.2%, the largest increase among provinces. Vancouver (+3.4%) reported the third largest price increase among all surveyed census metropolitan areas, with the price of both land (+1.8%) and buildings (+4.3%) up from last year. In Victoria, new housing prices rose 1.4% in June compared to the same month the previous year, while Kelowna saw prices climb by 2.9% in the same period.

Nationally, new housing prices were 0.8% higher in June than in the same month of 2017, led by Ottawa-Gatineau (Ontario part) growing at 5.0%, London (+4.8%), and Vancouver (+3.4%). The increase was widespread, as new housing prices were up in all but five of the reported census metropolitan areas, albeit prices decreased in Saskatchewan (-1.1%) and Newfoundland and Labrador (-0.7%). Toronto (‑1.3%) posted the largest decrease among census metropolitan areas. 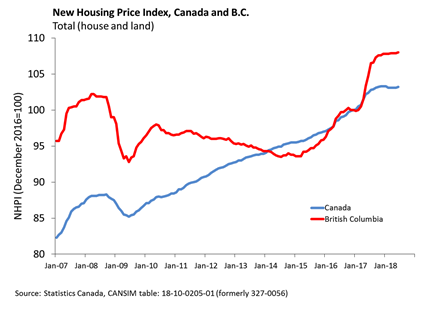