B.C.’s commodity trade with the U.S. continues to rise despite protectionist sentiment in that country 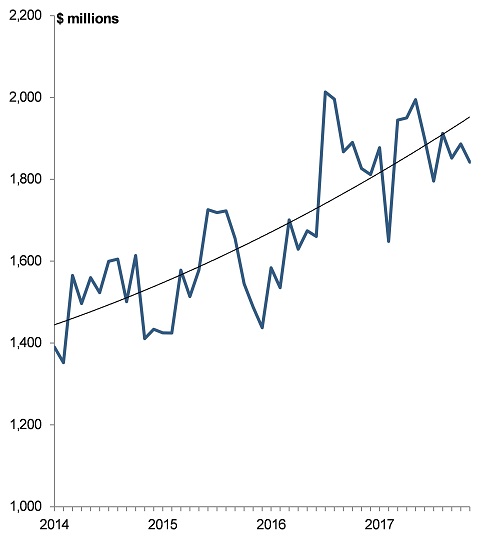 Exports of solid wood products fell 3.2% year-to-date to November, compared to January to November 2016. Most of the decline was due to a 4.8% drop in shipments of softwood lumber, likely due to a combination of the effects of last summer’s forest fires and the trade dispute with the United States. However, there were also reductions in exports of selected value added wood products (-6.3%), cedar shakes and shingles (-8.9%) and “other” solid wood products (‑6.9%)1. On the other hand, shipments of softwood plywood and veneer (+2.6%), other panel products (+7.5%) and logs (+6.0%) all increased.

Elsewhere in the forest sector, there was robust growth in exports of pulp and paper products, with an 11.1% increase year-to-date to November, compared to the same period in 2016. Shipments of pulp jumped 13.7% and there was also strong growth in exports of newsprint (+6.2%). Other paper and paperboard bucked the trend, with a marginal 0.1% decline in shipments, while other pulp and paper product exports climbed 8.6%. Future trade in newsprint could be threatened due to the possibility of trade action from the United States in response to allegations of unfair dumping of Canadian newsprint in the American market. The U.S. is the destination for around 30% of B.C.’s newsprint exports.

The value of B.C.’s energy product exports jumped 57.3% over the first 11 months of 2017, compared to the same period a year earlier. The value of coal shipments soared 72.3%, mainly due to an increase in price, as volumes shipped climbed only 6.1%. Similarly, the value of electricity exports climbed 28.4%, while quantities of electricity transmitted across the border rose only 6.3%. There was also a substantial rise in the value of natural gas exports (+56.1%) and other energy product shipments also increased (+12.7%).

Shipments of agricultural and food products increased 16.5% year-to-date to November, while exports of fish products dipped 1.7%. There was strong growth in shipments of fabricated metal products (+15.9%) and exports of machinery and equipment rose 1.7%; however, there was a drop in shipments of both chemicals and chemical products (‑2.0%) and plastics and articles of plastic (-4.2%)2.

All the growth in shipments was to the United States (+4.4%), as exports to the rest of the world fell 2.8%. A 9.2% jump in shipments of forestry products and building and packaging materials drove much of the growth in exports to the U.S., and while there was also strong growth in shipments of those products to the rest of the world (+10.6%), it was more than offset by large drops in exports of energy products (-10.4%), metal ores and non-metallic minerals (-18.3%) and metal and non-metallic mineral products (-9.5%).

1Note that due to revisions to the commodity codes, there may be a small data break in the selected value-added wood products category, which also affects the total of solid wood products. Growth rates may be slightly understated.

2Note that due to revisions to the commodity codes, there may be a data break in the machinery and equipment commodity grouping. Growth rates may be overstated.